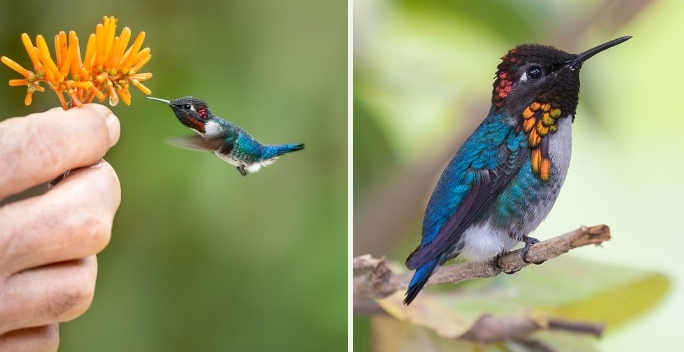 Hummingbirds are already known to be tiny, ranging among the smallest bird in the world. But the tiniest of them all is the Bee hummingbird, a species native to the entire Cuban archipelago, including the main island of Cuba and the Isla de la Juventud in the West Indies.

The Bee hummingbird (Mellisuga helenae), also known as Zunzuncito or Helena hummingbird, is the world’s smallest living bird, only a little bigger than a bumblebee, and hence the fitting name ‘bee’ hummingbird. That is why they are also often mistaken for bees or some other insects. As they are so tiny, that are considered to have fewer feathers than any other bird on Earth.

Female bee hummingbirds are slightly larger than males, reaching up to 6.1 cm from beak to tail, and weighing around 2.6 g while males measure just about 5.5 cm, and weigh around 1.95 g. Both males and females are rather plump looking, but they can be differentiated by their color and patterns.

During the breeding season, which extends from March to June, the male develops a fiery red throat and head as a way to attract the (less colorful) females. It has grayish white underparts, bluish upper parts and an iridescent gorget with elongated lateral plumes.

As for females, they are bluish green with a pale gray underside. Their tail feathers have white spots at the tips. Juvenile non-breeding males look similar to females, and it can be difficult to tell them apart. One way to distinguish between them is to check the tail tips of the female for the white spots. In fact, the iridescence of the plumage may not always be visible, as it depends on incident light and viewing angle.

Usually, Bee hummingbirds have solitary lives, however, during the mating season, the males gather together in small singing groups, which a female hummingbird will visit to select a mate. Apart from displaying their striking colors and gaining the attention of a female by their voice, males have other ways to make themselves noticed by an observing female. Each one of them presents aerial displays, including dives in which they flutter their tail feathers. After that, the female selects the male she’s most impressed with.

Read Also: 12 Of The Most Spectacular Hummingbirds In The World

The female bee hummingbird builds the nest by herself, using strands of cobwebs, tree bark, lichen and soft plant fibers for the lining. The cup-shaped nest is smaller than a golf ball, measuring about 2.5 cm (1 in) in diameter. The female lays either one or two tiny white eggs, about the size of a coffee bean or a quarter, and will incubate them for 14 to 23 days. After they are hatched, the mother looks after the newborn chicks for 18 days. The chicks fledge around 18 to 38 days after hatching and will reach reproductive maturity when they are about one year old. During the 4 or 5 days of nestling, the juvenile birds practice their flight capabilities. If they are lucky enough, bee hummingbirds can live up to 7 years in the wild.

The bee hummingbird’s slender, pointed bill is adapted for probing deep into flowers. It feeds mainly on nectar of woodland flowers, especially those that are more horizontally positioned. Instead of landing on the flower, it feeds while hovering in the air. On a single day, the bee hummingbird can visit as many as 1500 flowers. In its feeding process, the tiny bird ends up collecting pollen on its bill and head. The pollen gets transferred in this way, when the hummingbird flutters from flower to flower. Occasionally, it can eat insects and spiders. In fact, bee hummingbirds spend 15% of their time eating and on a typical day, they can consume up to half their body weight in food.

Read Also: 20 of the most beautiful moth species

To say that the bee hummingbird is restless would be an understatement. Indeed, they spend more time flying than any other species and are able to fly for up to 20 hours without resting. In flight, they beat their tiny wings up to 80 times a second, reaching speeds of 25 – 30 miles per hour, and which allows them to remain stationary in the air to feed on flowers. During a courtship display, the males are able to beat their wings as much as 200 times per second!

As well, they are capable of flying up, down, backwards and upside down. This rapid movement of their wings during flight produces a sound resembling that of a bumblebee, hence the attribution of its common name Bee hummingbird. Also, it is the sound of their wings that gives the birds their onomatopoeic name in both Spanish and English. However, all this constant flapping of the wings causes the hummingbird to refuel every few minutes, which explains their almost continuous feeding all day long.

Although these tiny birds are remarkably courageous against larger birds, they are nonetheless particularly vulnerable due to their small size and are attacked by predators that view them as insects. Not only do they have to be aware of larger birds and mongoose, but they are also wary of frogs, fish, bees, wasps, and even spiders. Unfortunately, human activity has been their biggest threat by far, as is the case with many other critters around the world. Bee Hummingbirds are classified as “Near Threatened” on the IUCN Red List for birds in regard to conservation.