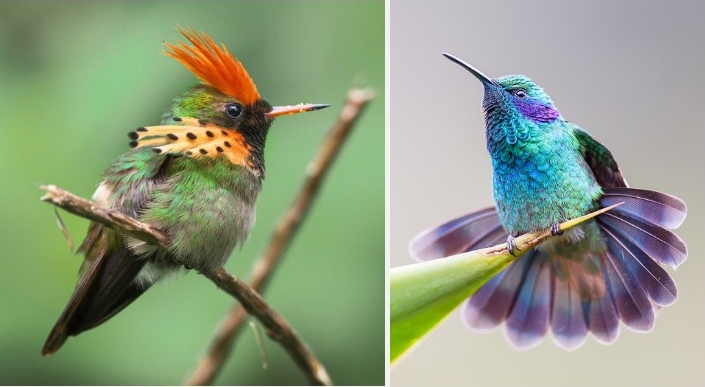 There are about 338 different species of hummingbirds found only in the Americas. What makes them unique is their exceptional ability to hover for extended periods of time and even fly backwards. Despite their tiny physique, the male hummingbirds are among the most flamboyant birds in the world, often sporting an array of brilliantly colored and iridescent feathers used to impress mates. Inhabiting rainforests, hot dry deserts and the intense cold regions of the Andes, these highly adaptable birds can survive in practically most places.

Here are 12 of the most spectacular hummingbirds in the world. Enjoy!

The Fiery-throated hummingbird (Panterpe insignis) is a medium-sized hummingbird of the Talamancan montane forests of Costa Rica and western Panama. They are usually found in cloud forests at elevations of 1,400 m (4,600 feet) or above; as well as frequenting scrub at the woodland edges and clearings. Their average size is of 11 cm or 4.3 inches in length, and they weigh about 5.7 g or 0.2 oz. They have a straight black bill and dusky-colored feet.
The adult bird has brilliant green body plumage, a dark blue tail, and a white spot behind each eye. Its sides and the back of the head are velvety black. Usually, this small bird appears dark, but with incident light falling at the correct angle, it reveals a brilliant blue crown, yellow-bordered coppery orange throat and a violet-blue chest patch.

The Green violetear (Colibri thalassinus) is a colorful hummingbird that is found from Costa Rica to northern South America. The Green violetear is split into two species: Mexican violetear (Colibri thalassinus) and Lesser violetear (Colibri cyanotus). They generally prefer more humid habitats and high-altitude areas, such as cloud forests. They are medium-sized by hummingbird standards and measure around 9.7 – 12 cm (3.8 – 4.7 in) in total length. Their bills are slightly curved downward, and their throat and chest are a glittering green with a shining green belly, and they have a shimmering violet ear-patch on the sides of their neck. The tail is square, metallic blue-green with more bronzy central feathers and a distinct dark blue subterminal band.

This species breeds from Vancouver, Canada south to northern Baja California and east through southern Arizona. A male Anna’s hummingbird is the only North American hummingbird species with a red crown. The male’s head and throat are a deep rose-red, with the color extending on to the sides of the neck. Females and juvenile males have a dull green crown, a gray throat with or without some red iridescent flecks, and a gray chest and belly.
These small birds usually feed while hovering, using their bill and long extendable tongue, and while doing so, they contribute to plant pollination. They also consume small insects, which they can catch in midair or pick from vegetation. An interesting fact about Anna’s hummingbirds is that it can shake its body 55 times per second to get rid of rain while flying, or to clear away pollen or dirt from feathers during dry weather. If you’re wondering about the name, this hummingbird is actually named after Anna Masséna, Duchess of Rivoli!

Read also: Adorable Photos Of Young Owls Sleeping With Their Face Down

The male is dark green on top with iridescent green crown and a small white eye spot. Its tail is almost twice as long as its body with the external feathers longer than the others and the feathers are iridescent metallic violet with blue tips. The female is also mostly green and has a blue crown, a rusty-orange abdomen, and white upper chest band and tail tips. Also, the female has a much shorter tail than the male.

The Velvet-purple coronet (Boissonneaua jardini) is a species of hummingbird in the family Trochilidae. This South American hummingbird is native to the humid foothill forest on the West Andean slope in western Colombia and north-western Ecuador in South America. It has a striking iridescent plumage with bluish-purple underside and crown, greenish-blue on the back, green on the upperwing feathers, and rufous on the underwing feathers. Depending on the lighting, the plumage may appear all black, except for the contrasting white outer flight feathers.
This species primarily feeds on nectar taken from a variety of brightly colored, scented small flowers of trees, herbs, shrubs and epiphytes, and it prefers flowers with the highest sugar content. Occasionally, it also consumes some small spiders and insects, which are an important source of protein, especially needed during the breeding season.

The Green-crowned brilliant is a large, robust hummingbird found in the highlands from Costa Rica to western Ecuador, usually between 700 and 2,000 m in altitude, and which inhabits wet mountain forests including edges, gaps and tall second growth. The male measures on average 13 cm (5.1 in) long and weighs 9.5 g (0.34 oz). Its plumage is mainly bronze-green with a glittering green crown, forehead, throat and breast. It has a white spot behind the eye, a small violet throat patch, white thighs, and a deeply forked blue-black tail. The female is distinguished from the male in that she has green-spotted white underparts, a white stripe below the eye, and a white-cornered shallowly-forked black tail. Unlike many hummingbirds, the Green-crowned brilliant almost always perches to feed.

Read also: The Great Eared Nightjar, A Dragon-like Bird Straight Out Of A Fantasy Movie

The Sword-billed hummingbird, being the only member in the genus Ensifera, is a neotropical species of hummingbird occurring in the Andean regions of South America. Their upper plumage is mostly a glittery green, while the lower plumage is lighter in the male and white with greenish-black spots in the female.
Among the largest species of hummingbird, it is distinguished by its exceptionally long bill – it is the only bird to have a beak longer than the rest of its body, excluding the tail.

On average, the adult hummingbird measures 13–14 cm (5.1–5.5 in) long, excluding the bill, which is 8–12 cm (3.1–4.7 in) in length. It uses its long bill to drink nectar from flowers with long corollas, which may be inaccessible to other species. When feeding, it probes flowers from below and while perching, it angles its bill upwards, to reduce the strain of the heavy beak and improve balance. While most hummingbirds preen using their bills, this species is forced to use its feet to scratch and preen due to the length of its bill.

The Marvelous spatuletail (Loddigesia mirabilis) is an Endangered species of hummingbird in the tribe Heliantheini in subfamily Lesbiinae and endemic to northern Peru. The male’s distinguished feature is his two elongated tail feathers with bare shafts that can grow 3-4 times the body’s length and, which cross each other and can move independently. There is a large violet-blue racquet or “spatule” at the end of each feather. The two remaining tail feathers are shorter and narrow, and are supported by two long undertail coverts.
During courtship displays, the male shows off his tail while he hovers in front of the female. As for the female, her tail is shorter than the male’s, and it does not have the racquets. The Marvelous Spatuletail male has iridescent green-bronze to bronze-brown upperparts with blackish flight feathers and a deep blue crest on the head. The male measures from 15 to 17 cm (5.9 to 6.7 in) long including its tail, which attains between 11 and 13 cm (4.3 and 5.1 in) in length. Females are 9 to 10 cm (3.5 to 3.9 in) long with a 5 to 7 cm (2.0 to 2.8 in) tail.

The Ecuadorian hillstar is a species of hummingbird native to the Andes of Ecuador and extreme southern Colombia, and can be found in high-altitude mountain grassland between 3500 and 5200 m. This species measures about 12 cm and weighs approximately 8 g. The male has dark olive-green upperparts, with blackish outer flight feathers, and their head and upperthroat display a glittering purplish-blue hood. The female has pale bronze-green upperparts, with a whitish throat that is heavily speckled with brown rounded spots.
These hummingbirds feed mainly on nectar from flowers, especially those of Chuquinagua insignis, a shrub with orange flowers. But they also feed from other plant species such as Malvaceae and Puya, an endemic Andean plant. Additionally, they complement their diet by consuming numerous insects and spiders caught by hawking and by gleaning from vegetation, leaves and rocky surfaces. When feeding, they perch on the flowers rather than hover, thanks to their large feet.

Read also: Top 12 Insects With The Most Incredible Camouflage And Mimicry

The broad-billed hummingbird (Cynanthus latirostris) is a small-sized hummingbird found in Mexico and across the southwestern United States. It is about 8–10 cm (3.1–3.9 in) long, weighs only 3–4 grams and has a long, bright reddish colored bill with a black tip. This small hummingbird shows sexual dimorphism – the male is a brilliant metallic green with white undertail-coverts, a dark blue throat and a blackish-blue broad tail while the female has a pale belly, a white eyestripe and white-tipped tail feathers. The juveniles tend to resemble the adult female and as they grow older, the bill of the juvenile males will redden and iridescent feathers will become visible on its throat.
The Broad-billed hummingbird has been observed to prefer feeding from red or red-and-yellow flowers the most. To feed on nectar, the hummingbird will extend its bill and long tongue into the flower to access the nectar while hovering, but at feeders they will perch. This hummingbird also consumes insects that they can catch midair or hover and pluck them from a plant.

The Snowcap Hummingbird (Microchera albocoronata), also called White-crowned hummingbird, is a tiny hummingbird that ranges from southern Honduras to central western Panama. It measures about 2.5 in (6.5 cm) in length, including its short black bill and tail. The adult male is distinguished by its shining white cap from which its common name originates. His upper plumage has a striking reddish / purplish / bronze iridescence, and his outer tail feathers are white. As for the female, she is mostly bronze-greenish above and dull white below and has dull whitish outer tail feathers. Juvenile Snowcaps resemble the adult female, except they are generally duller. Their under plumage is grayer, and they have bronzed central tail feathers.

The Rufous hummingbird (Selasphorus rufus) is a small hummingbird among the seven species in the genus Selasphorus, and that breeds in northwestern U.S. and Canadian forests, and winters in Mexican highlands, sparsely along the U.S. Gulf Coast. The adult male has a white breast, rufous face, flanks and tail and an iridescent orange-red throat patch or gorget. The female has green, white, some iridescent orange feathers in the center of the throat, and a dark tail with white tips and rufous base.

The Rufous hummingbird is a typical size among hummingbirds, and the female is slightly larger than the male. It reaches between 7–9 cm (2.8–3.5 in) in length, weighs about 2–5 g (0.071–0.176 oz) and has a wingspan of 11 cm (4.3 in). These birds are known for their extraordinary flight skills, flying 2,000 mi (3,200 km) during their migratory transits. Western rufous hummingbirds migrate through the Rocky Mountains and nearby lowlands during May to September to take advantage of the wildflower season.