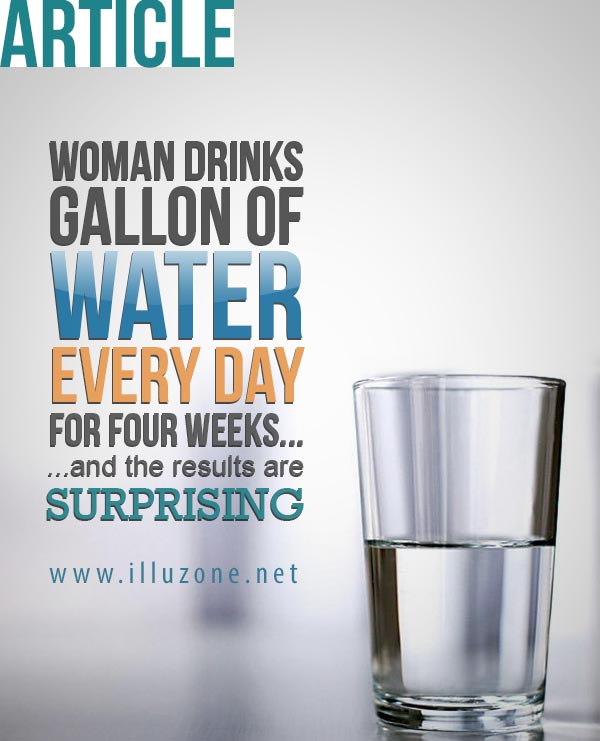 [dropcap]S[/dropcap]ufficient daily water intake is vital for virtually every function within our bodies yet fewer than one in five of us drinks enough. Read on to see the results of this experiment.

Sarah Smith is a 42 year old mother of two young kids in the UK. She, like many others, openly admitted to not drinking the recommended 2 to 3 liters of water daily. She suffered from poor and sluggish indigestion and regular headaches. Following consultations with medical professionals for both issues she decided to take heed of the advice given – in both cases she had been told that she needed to up her intake of water. She decided to document and photograph what happened in a self imposed experiment whereby she would drink 3 liters, just over 5 pints, of water per day, every day for an entire month and see if she could feel any benefits.

At the outset Sarah took a long hard look at her face noting that “I am 42, but have to admit I look more like 52 in this picture, which is shocking. There are dark shadows under and around my eyes, which make me look exhausted, a profusion of wrinkles and strange reddish blotches, and my skin lacks any lustre. It looks dead….even my lips look shrivelled.”She spread the water out during the day aiming to drink a big jug of water in the morning, another in the afternoon with a third in the evening.

At the end of theFIRST WEEK she had already noticed that her bowel function was improved and her urine was virtually clear as the water was flushing out her previously dehydrated poorly functioning kidneys. She noticed sudden skin breakouts, which were a result of the toxins being eliminated from throughout her body. However her headaches were already gone and her previous joint stiffness first thing in the morning was vastly improved. Water is vital for lubricating the joints.

WEEK TWO saw an improvement in her skin tone and general complexion although she noted that her eyes were still wrinkled but said “they look less crepey and shadowy than before”. She also had a visibly flatter stomach and her smart husband paid her the ultimate compliment by noting that her cellulite had vanished! Significantly she had another week headache free.

On toWEEK THREE  when Sarah was happy to find that her eye wrinkles and dark circles had all but disappeared and her skin was plumper and healthier looking. She noted that she was actually eating less by this stage as she had fallen into the common trap of reading signals from her stomach as being hunger pangs whereas they were actually thirst pangs. Research has shown that 37 per cent of people actually mistake thirst signals for hunger signals. The plentiful water had now stopped her from continually falling into that unhealthy trap.

So what about the end ofWEEK FOUR? Sarah said “I genuinely can’t believe the difference in my face. I look like a different woman. The dark shadows around my eyes have all but disappeared and the blotches have gone. My skin is almost as dewy as it was when I was a child. The transformation is nothing short of remarkable.” She was leaner, fitter and nobody can deny the astonishing change to her appearance. She changed nothing else in her daily routine apart from the water intake. Here are the before and after photographs:

To those of you already converted to drinking enough water these results will merely confirm what you already know, but to anyone who is guilty of not doing so, will this persuade you to try this for yourself ? If you found this article useful, share it with family and friends by clicking on the share buttons.

The information provided in this article is sourced from the internet, from friends and contacts, and from personal experience. As we mention in our my articles, not every remedy will work on everyone. So is conventional medical treatment. It very much depends on the constituents of the person and the conditions peculiar to that person. Whatever the reasons, this article does not claim the information provided is totally accurate and reliable and will cure everyone. The purpose of this article is merely to inform visitors that there are alternative cures for all ailments.

You are therefore advised to consult your registered medical physicians as a matter of due diligence.

Imagine all animals having cat faces

Fog covering the village of Halstatt (Austria) on

Enormous roots of a Banyan tree in Sarasota, Flori

Love ❤ Swans are the largest members of the du

The wonderful hidden treasures of our oceans! Halg

This penguin looks like he has just come out from