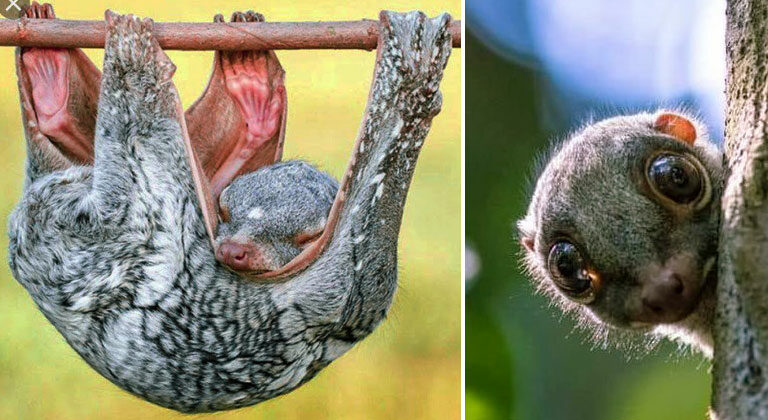 The colugo, or flying lemur, is a unique and fascinating mammal found in Southeast Asia. Despite its name, it is not a lemur and does not actually fly; instead, it glides through the air using a patagium, a membrane of skin stretched between its limbs. This adaptation allows the colugo to cover long distances between trees with minimal effort and energy expenditure.

Colugos are nocturnal and arboreal, spending most of their time in trees. They are known for their slow movements and tendency to sleep for long periods of time during the day. Their diet consists mainly of leaves, fruits, and flowers. They have grasping hands and feet with sharp claws, which allow them to climb and cling to trees easily.

The colugo’s patagium is a remarkable adaptation that allows it to glide efficiently through the forest canopy. The patagium is attached to the colugo’s limbs and tail, and can stretch up to 2 meters in width. When the colugo jumps from a tree, it spreads its patagium, creating a wing-like surface that catches the air currents and allows it to glide smoothly and silently through the forest. The colugo can control its direction and speed by adjusting the position of its limbs and tail.

Colugos are elusive creatures that are difficult to observe in the wild. They are solitary and shy, and tend to avoid contact with humans. However, their arboreal lifestyle and nocturnal habits make them well-suited to life in the forest canopy, where they can move around and forage for food with minimal disturbance.

Unfortunately, colugos are facing a number of threats in their native habitats. Habitat loss and degradation, caused by deforestation and agriculture, are the main threats to the species. In addition, colugos are hunted for their meat and for traditional medicine in some parts of their range. As a result, colugos are considered a vulnerable species by the International Union for Conservation of Nature (IUCN).

In conclusion, the colugo is a unique and fascinating mammal that plays an important role in Southeast Asian ecosystems. Its patagium is a remarkable adaptation that allows it to glide efficiently through the forest canopy. However, the colugo is facing a number of threats and its future is uncertain. It is important that we take steps to protect colugos and their habitats to ensure their survival for future generations.