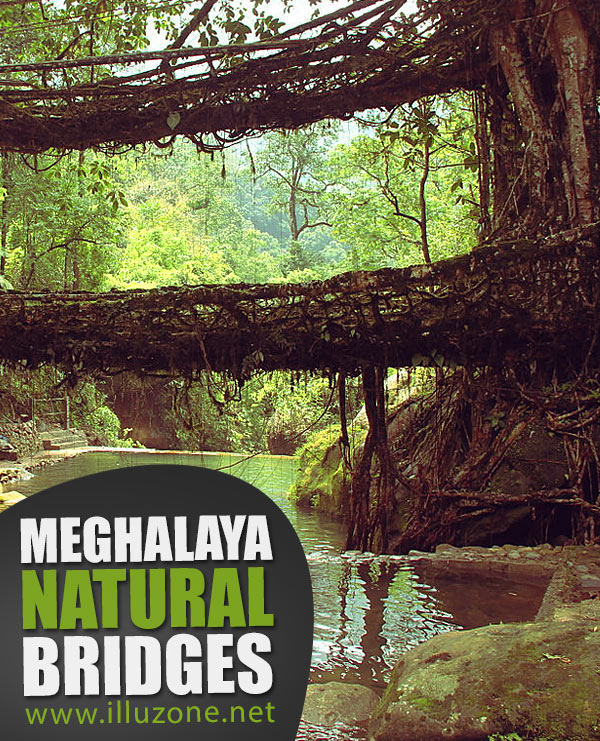 [dropcap]I[/dropcap]n the northeastern Indian state of Meghalaya, where Ficus elastica are large, native outdoor trees that live near water, the local people have been using the ficus’s roots as bridges for generations.

These aren’t trees that have fallen naturally over streams, though, which are commonly used as bridges in other places. Instead, the people train the trees’ roots to grow over the streams, guiding them over a period of 20 or so years into the shapes of paths and handrails until they have a bridge strong enough to carry many people at once. And as the tree grows, so does the bridge, gaining in strength over time, as the magazine Geographical noted earlier this year:

Once the roots have been trained across the stream bed, they anchor in the soil of the opposite bank, providing the foundations for a living bridge. Usually, several roots are threaded together for strength, while others provide handrails and supports for longer spans. Flat stones from the stream bed are used to fill gaps in the bridge floor and, in time, these are engulfed by woody growth and become part of the fabric of the bridge itself.

A root bridge takes around 20 years to become fully functional. Once complete, however, it will probably last for several hundred years and, unlike its non-living counterparts, will actually increase in strength with age.

Known in the Khasi language as jingkieng deingjri (‘bridge of the rubber tree’), the bridges may be anywhere from ten to 30 metres in span. Unlike most artificial structures, they are able to withstand the high level of soil erosion brought about by monsoon rains and, being living material rather than dead wood, are resistant to the ravages of termites.