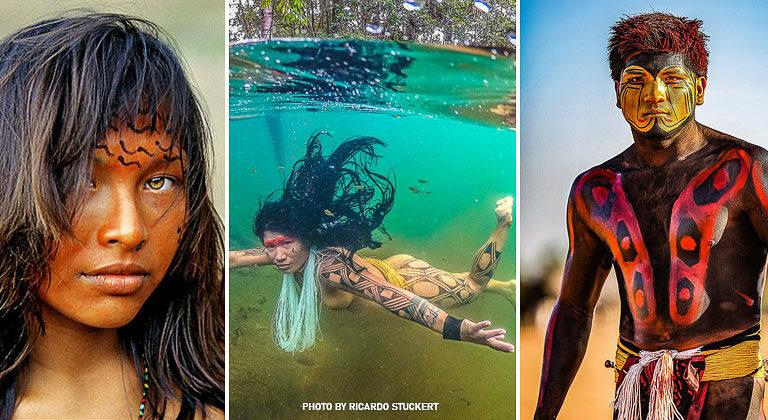 The Brazilian rainforest is a breathtaking and vital ecosystem, home to an estimated 400 indigenous tribes who have lived in harmony with the land for generations. These tribes have a deep spiritual connection to the forest and rely on it for their physical and cultural survival. However, in recent years, the way of life of these tribes has come under threat as the rainforest faces destruction from logging, mining, and agricultural development.

The Brazilian rainforest is the largest in the world, covering over 7 million square kilometers. These tribes have a rich history and culture, with their own languages, traditions, and spiritual beliefs. Many of these tribes have lived in the rainforest for thousands of years and have developed a deep understanding of the land and its resources. It is truly heartbreaking to see these ancient and invaluable cultures being threatened by the actions of outsiders.

However, the rainforest is facing numerous threats that are putting the way of life of these tribes at risk. Logging, mining, and agricultural development have all contributed to the destruction of the rainforest and the displacement of indigenous communities. These activities not only destroy the natural habitat of the tribes, but they also pollute the water and air, leading to health problems for the indigenous people. It is a cruel irony that the very land that has sustained these communities for centuries is now being exploited and damaged by outsiders.

The Brazilian government has a legal obligation to protect the rights of indigenous tribes and to ensure that their way of life is preserved. However, these protections are often not enforced, and indigenous communities are often forced to fight for their rights against powerful interests. In many cases, indigenous leaders and activists have been killed while defending their land and their communities. It is a tragic and unacceptable reality that those who are trying to protect their homes and cultures are being met with violence and oppression.

Despite these challenges, many indigenous communities in the Brazilian rainforest are working to preserve their way of life and to protect the forest. They are using a range of strategies, including legal action, environmental education, and community organizing, to defend their rights and to raise awareness of the importance of the rainforest. It is heartening to see these communities coming together and fighting for their future, and it is crucial that they receive the support and recognition they deserve.

In conclusion, the Brazilian rainforest tribes are facing significant challenges as they struggle to preserve their way of life and protect the forest. It is a deeply unjust situation that these ancient and valuable cultures are being threatened by outside forces. However, despite these challenges, many indigenous communities are working tirelessly to defend their rights and to raise awareness of the importance of the rainforest. It is crucial that the government and other stakeholders take action to support the efforts of these communities and to ensure that the rainforest is protected for future generations.

here are a few facts about the Brazilian rainforest:

A Brazilian Indian wearing a stunning traditional headdress unique to his tribe. Ricardo’s Brazilian Indians project aims to demonstrate the extraordinary multiculturalism that exists in Brazil, a country of over 210 million people, nearly one million of whom are indigenous.