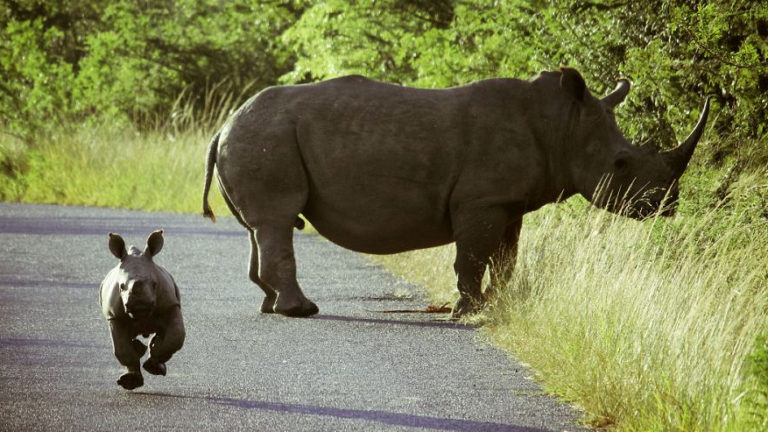 The cheerful rhino calf was spotted during a safari tour in St Lucia, South Africa. Bouncing around like any spring lamb (just a lot heavier), the baby rhino went off ahead of his mother’s heavy footsteps.

Robyn Bamber, a safari tour guide, managed to capture some amazing photos of the baby animal as it leapt and posed for the camera. She had spotted the rhinos at the end of a half-day drive safari for Heritage Tours & Safaris in the South African bush.

The cute baby rhino, estimated to weigh an impressive 42 kg, jumped and kicked, then charged at Bamber and her guests, as his 1.8 ton mother seemed to cast a proud look towards him.

The little one came as close as about 1.5 m from the truck, giving a little snort of satisfaction before turning on its footsteps and disappearing off into the wilderness. His unexpected little stunt surely took the tourists by surprise!

“At first sight the little rhino had me in awe, then shortly after scrambling for my camera. He had the guests and myself all entertained and laughing,” mentioned Robyn Bamber.

“The female rhino started to make her way up the road away from us, with the little rhino racing ahead. Then, as if to say, ‘Mum watch this’, the little rhino came charging straight towards us,” Bamber added.

At the beginning of the 20th century, 500,000 rhinos populated Africa and Asia. But that number dropped drastically to 70, 000 by 1970, and as of today, only around 27,000 rhinos remain in the wild. Due to relentless poaching for their horns and habitat loss over many decades, very few rhinos are able to survive outside national parks and reserves. Three species of rhino, namely the Black rhino, Sumatran rhino and Javan rhino, are critically endangered.

Killed for their horns, these are bought and sold on the black market for high prices. Rhino horns are in very high demand in many Asian countries because of folk medicine. Especially in China and Vietnam, it is bought by wealthy consumers to use in traditional Chinese medicine, among other uses. Rhino horns are made of keratin, the same material as hair and fingernails, however, there is no sufficient evidence to support the claims of their health benefits. In North Africa and the Middle East, there is a market for rhino horn dagger handles as well.