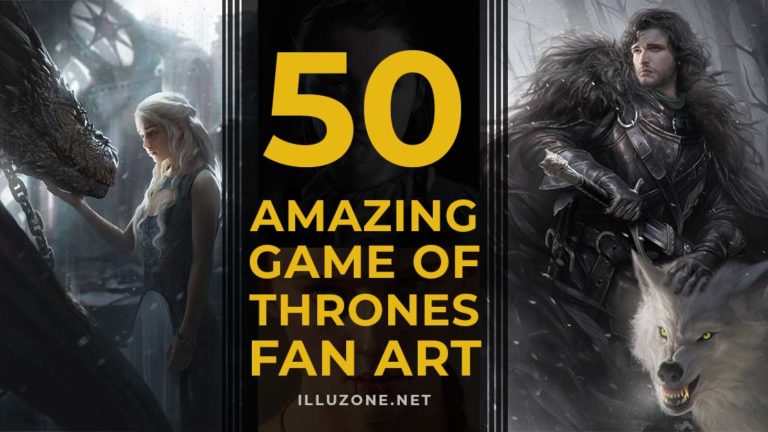 We’ve delved into the net for an amazing list of fan art on the “Game of Thrones” theme. Scroll down to see various interpretations of the characters and scenes from the movie as well as with some unique personal spin from the artists. The list features mostly digital art with some beautifully made traditional art too.

This depiction of Arya Stark by DavidDeb is made with traditional medium of marker and watercolour.

Another watercolour piece of Arya Stark by the same artist.

This piece of Arya Stark below is made with pencils on extra smooth bristol board.

All of the main characters depicted in one poster.

A couple more artworks by the same artist. We love the style and renderings on these illustrative pieces.

A striking poster of the Night King with his glacial fierce expression, and the soft romance of Daenerys and Jon Snow in the foreground.

We love this piece for its dynamic angle and the fiery colour scheme.

Some more artwork in similar style by the same artist – yagihikaru.

Let us imagine what it could have been like with Jon Snow on the Iron Throne.

Beautiful brush work and colour scheme in this expressive piece of Daenerys.

Amazing brush works and expression on Tyrion’s face by the same artist again.

One of the most photo realistic renderings of Sansa Stark that we’ve seen so far, with an expression that is spot on.

Arya Stark pulling up one of her badass expressions! Really well made with a beautiful painting technique.

Other impressive artworks by Fantaasiatoidab. This artist caught their express so well. We particularly love the “Don’t Ever Betray Me” piece. All are rendered using pencils, mechanical pencils, fineliner, blending stick, white gel pen on A4 paper.

It could have turned out like this. What do you think?

We love how cute Ghost looks in this piece!

A stunning piece of Jon Snow.

And a remarkable artwork showing Bran Stark with his wolf by the same artist.

Bran Stark with wonderful eyes in this piece and the three eyed raven in the background adds a nice touch to complete this poster-style artwork.

A slightly different style by the same artist, while still keeping the poster style with Khal Drogo and Daenerys below.

A beautifully depicted scene of the Mother of Dragons with her three dragons.

We haven’t seen a lot of paintings of Jorah and this one is pretty impressive with some imposing brush strokes.

Traditional medium is used in this piece of Tyrion Lannister, colored pencil and black & white acrylic paint on grey paper.

One of the first scences of the series — Bran Stark, practising archery under the supervision of his older brothers Rob and Jon Snow. Rickon is behind them and two other guys.

Spoiler alert: A nice interpretation of the secret wedding of Rhaegar Targaryen and Iyanna Stark, parents of John Snow aka Aegon Targaryen.

And last but not least of this series, Tyrion re-mixed into a Breaking Bad theme, just for the fun!

We hope you’ve enjoyed this list of Game of Thrones Fan Art. Which one’s your favourite? Leave us a comment below.

Adorable baby animals with their parents

"Save me a spot please!" 😄 An adult lioness an

A Red bald-headed uakari feeding on a fruit in the

Spectacular thunderstorm off the coast of Hillarys

Stunning close-up of a species of African Emperor

A dazzling sunset with an incredible cloud formati