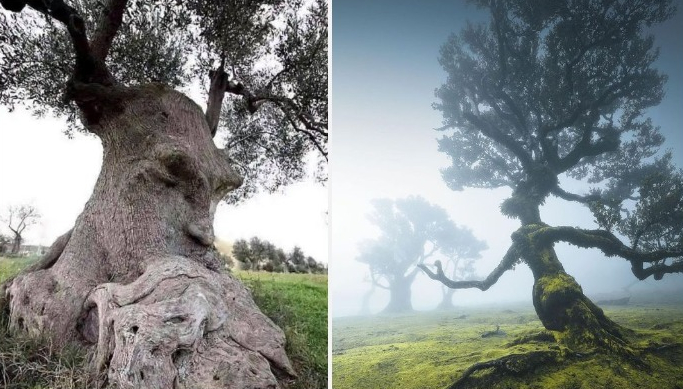 Trees have existed on the surface of Earth for millions of years, and it is believed the first “tree” appeared during the Devonian period, between 350 and 420 million years ago. They are among the oldest living organisms in the world and also the largest terrestrial plants. Like many other organisms, they come in a variety of sizes, shapes, and colors.

Some trees are truly remarkable in relation to their height, size and how wide they stretch their branches across. Others have evolved some extraordinary adaptations and are able to thrive even in harsh environments, with some seemingly defying the law of physics. Then, there are some individuals that have been sculpted in such a bizarre way that we would think Mother Nature is playing some kind of funny (or creepy!) joke on us! Some of these trees allude to an existing animal or a mythical creature, while others have taken such a strange shape that it totally enhances their eldritch appearance, and for sure, would inspire filmmakers of spooky movies.

Scroll down to see these awesome trees, from the ‘Ent’ tree to the ‘Dragon Head’ tree and decide which ones look more mysterious to you.

1. The unusual looking tree that looks like an “Ent”, located in the forests of the Balkan mountains, Bulgaria.

This tree of about 20 m high has two large branches sticking out from the main trunk and that appear like huge arms raising towards the sky. The tree even seems to have a “torso”, a head and a pair of legs, which makes it look even more like a person. However, it is unknown how this strange tree ended up having such a bizarre shape. Some people do believe that the human-shaped tree is reminiscent of an Ent, this fantastic being who closely resembles trees and appeared in the Lord of the Rings novel, from the author J.R.R. Tolkien.

2. The majestic ‘Candelabra’ Redwood along the Lost Coast Trail in California, United States.

This ancient tree, which grows on the Shady Dell property along the trail, has its giant limbs twisted by gale-force winds and the salty sprays from the ocean, which resulted in this distinct shape, likened to the arms of a candelabra.

3. The Crooked Forest located near the town of Gryfino, West Pomerania in Poland.

The Crooked Forest is a grove of strangely-curved pine trees that were planted around the year 1930. These pine trees bend sharply to the north at a 90-degree angle at the base, and then curve back to grow upright after a sideways excursion of 3 – 9ft (1 – 3 m). There are several theories surrounding the mystery about the curvature of the trees. Some have speculated that the shape is due to the unique gravitational pull in this particular area, while others believed that heavy snowfall may have weighed down the trees when they were sprouting. But the most popular theory relates how the trees may have experienced a force or damage when they were around 7 – 10 yrs old, which may have caused those strange curvatures; and also that some form of human tool or technique were used.

In Puglia, many of the Olive trees are incredibly old. And when we say old, we mean like thousands of years old! Their ages are represented through their twisted trunks that have evolved over centuries to form unique patterns of knots and gnarls. These ancient trees stand like sculptures and the contorted structures have somehow toughened the tree trunk, making it thick, sturdy and capable of remaining undisturbed for so many years.

5. Strange tree in the shape of an ‘Ent’ in Fanal forest, Madeira island (Portugal).

(Photo 1 above explains about the ‘Ent’ creature)

Read Also: 18 Most Bizarre Mushroom And Fungi Species In The World

7. A Strangler fig tree in a park in Nanning, Guangxi, China.

Strangler figs obtain their name for their ‘strangling’ pattern of growth upon host trees. This often leads to the host tree’s death, as the stranger fig absorbs the nutrients from their victims. The strangler fig turns into a “columnar tree” with a hollow central core when an original support tree dies.

9. The Dragon Head tree located on a trail off the Blue Ridge Parkway near Asheville, North Carolina, United States.

10. Two ancient Olive trees ‘hugging’ each other or maybe sharing a dance together.

11. The Majesty Oak of the Fredville Estate Park in Nonington, county of Kent, England.

This massive oak tree, known as ‘The Majesty Oak’ or simply ‘Majesty’, stands at over 20 m tall, with an impressive circumference of 12 m. It is believed to be between 500 – 600 years old, making it the largest surviving maiden oak in the UK, and possibly in the rest of Europe.

12. A palm-shaped branch holding a growing tree in Chantry Park in Ipswich, England.

13. The ‘Tree of Life’ near Kalaloch Campground in the Olympic National Park, Washington state, United States.

This Sitka spruce is known by several names, the ‘Tree of Life’, the ‘Kalaloch tree’ or even the ‘Runaway tree’ and it appears like it is just taking a stroll along the coast! The tree hangs in midair and is only supported by a few of its exposed roots on each side of the steep slopes. How the ‘Tree of Life’ has continued to thrive for so long, even with the erosion and severe storms affecting the coast, is a complete mystery!

Japanese maple trees are truly stunning with their phenomenal fall colors, displaying shades of purple, red, yellow, orange, and green as well as variegation throughout the growing season.

17. Enchanted tree in the North of England.

It seems like a human figure snuggled in the trunk of the tree and resting, but somehow, it has a spooky feel to it!

18. Dinosaur-shaped tree (maybe a Brontosaurus!) on a trail near Neahkanie Mountain on the Oregon coast, United States.

This incredible tree is supposedly a thousand years old according to some sources!

20. Trees with their roots entertwined along a trail at San Josephs Bay in Cape Scott National Park, NW Vancouver Island, BC, Canada.

This massive and ancient oak tree looks like it’s straight out of a fantasy world! It’s about six stories tall and is believed to be between 300 and 400 years old. It’s numerous branches sprawl in all directions in a much disheveled fashion, accentuating a spooky yet majestic appearance.

The 70ft beech tree with its gargoyle-like features was spotted by David Garnham and became an overnight sensation. The so-called ‘tree of terror’ appears to be screaming, with a twisted tongue forking from its mouth, and Garnham believes it shares an uncanny resemblance with Edvard Munch’s famous painting titled ‘The Scream’.

Read Also: 37 Most Unusual Rock Formations From Around The World

23. Famous Baobab trees nicknamed ‘the lovers’ or ‘baobabs of love’ are entwined around each other in an embrace (Madagascar).

24. Tree with the face of Sloth on the trunk, with the roots looking like its limbs (location unknown).

This majestic tree is believed to be over a thousand years old, making it the largest and oldest tree in Ardèche.

The tree appears bigger but it’s actually only about 1 m tall.