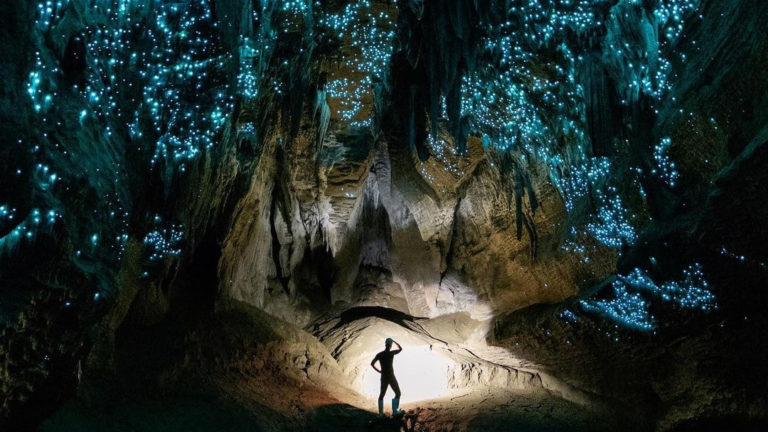 Hidden in deep caves on New Zealand’s North Island lies an enchanting world, wonderfully illuminated in the darkness. The Waitomo Glowworm Caves are a famous tourist destination that attracts numerous visitors who are awestruck by the mesmerizing spectacle upon entering the underground grotto. Striking stalactites hang from the ceiling, appearing to drip like melted wax, and the many thousands of glowworms that inhabit the caves offer a twinkling light show. The cave walls appear like a constellation of tiny stars scintillating and illuminating the water below. As described by the photographer Shaun Jeffers, when the headlamps are out and only the glowworms are visible, one can’t help but feel like they’ve just stepped into James Cameron’s Avatar Pandora; an otherworldly experience!

The name “Waitomo” originates from the Māori words “wai” for water and “tomo” for hole or shaft. In 1887, Maori Chief Tane Tinorau and British surveyor Fred Mace undertook an extensive exploration of the cave for the first time. With the use of a raft made from robust flax stems, they floated along the stream going underground through the mysterious cave and with only candlelight as their source of light. As they began their journey, they came across the Glowworm Grotto and were astounded by the twinkling glow emanating from the ceiling, which was caused by the luminescent light created by the glowworms.

As they traveled further inside the cave, they stumbled upon limestone formations of different shapes and sizes and fossilized shells. After their initial expedition, the two men returned to the caves several times to further their exploration. They surveyed various chambers and eventually uncovered various entry points. Chief Tane Tinorau independently discovered the upper level entrance to the cave, which is now the current entrance.

By 1889, Chief Tane Tinorau and his wife Huti had opened the caves to visitors and were guiding groups through this enchanting world of luminescent light for a small fee. In 1906, the government became responsible for the administration of the caves, however, the Waitomo Caves network was returned to Tinorau’s descendants in 1989. Today, the caves are closely monitored and protected by a special Scientific Advisory Group.

The Waitomo region comprises around 300 known limestone caves which were formed by a combination of geological and volcanic activity over the last 30 million years. But the Waitomo Glowworm Caves are probably the most special of them all. The names attributed to the different cavities and hollows are in relation to their scale, splendor and the entrancing effect they have on visitors.

The limestone formation in the Waitomo Glowworm Caves occurred when the region was still submerged under the ocean about 30 million years ago. The limestone is composed of fossilized corals, seashells, fish skeletons, and many small marine organisms on the sea beds. The limestone got created over millions of years when these fossilized rocks have been layered upon each other and compressed together. Within the Waitomo region the limestone can be over 200 m thick.

The formation of the caves was due to the hard limestone bending and buckling under the ocean and rising above the sea floor, which was caused by earth movement. Once exposed to air, the rock separated and cracks were formed, while other weaknesses allowed for water to flow through them. This resulted in the limestone getting dissolved and over millions of years large caves were formed.

There are two levels to the caves – upper and lower. The lower level is flooded and normally accessed by boat. As for the upper level, it is dry and highlights some very remarkable rock formations such as the Banquet Chamber, the Pipe Organ and the Catacombs. The Cathedral, located on the lower level, is well-known for its exceptional acoustics and even housed a performance by the famous New Zealand opera singer Kiri Te Kanawa.

Visitors can take boat tours along the Waitomo river through a number of illuminated tunnels inhabited by the cave’s famous glowworms known as Arachnocampa luminosa. These glowworms, commonly referred to as New Zealand glowworms, are a species of fungus gnat endemic to New Zealand. They are not actually worms but the larvae of fungus gnats, an insect that resembles a mosquito. There are two types of fungus gnats – those that feed on fungi like mushrooms, and those that are carnivorous and feed on other smaller insects. The glowworms in New Zealand and Australia are the larvae of the carnivorous type. The larval stage and the imago produce a blue-green bioluminescence. Its Māori name is titiwai, which means “projected over water”.

Glowworms are bioluminescent, meaning they produce and emit light naturally. The glow is created through the reaction of an enzyme called luciferase acting upon a small molecule of luciferin. This happens in modified excretory organs known as Malpighian tubules in the abdomen. The chemicals and enzymes from their bodies are reacting with oxygen in the air to create light. Apart from being a wonderful sight, the bioluminescent glow is also used to lure prey. Smaller insects such as mayflies, midges, moths and flies are attracted to the light and fly towards it.

Larvae of these fungus gnats start to glow as soon as they hatch from their eggs which are usually deposited directly onto the cave wall. They measure between 3 to 5 mm long when they first emerge and will grow to about 30 – 40 mm over several months. The larva may move around on the surface of the cave before it chooses a spot where it will produce its silk nest.

To ensnare their food, glowworms build a network of silk threads covered in a sticky mucus, which hang vertically from their habitat. As the smaller insects are attracted to the bioluminescent light, they fly toward it and get stuck into the slimmy silk maze – similar to how spiders catch their prey in webs. The larva pulls up the prey entangled in the trap by ingesting the snare and starts feeding on the prey alive.

After five larval instars, the larva will suspend itself on a long thread and pupate over up to 24 hours, with the pupal phase lasting about two weeks. At this stage, the pupa continues to glow, however, males ultimately lose their glow. Adults generally emerge during the winter, with females living up to 76 hours while males will survive up to 96 hours.

An interesting fact to note is that adult glowworm flies never get caught in these sticky silky webs since they are not drawn to the light. As well, they are strong enough to pull away from the threads.

So, if you are planning to visit New Zealand some day, make sure to include the fascinating Waitomo Glowworm caves in your itinerary to have the chance to experience this incredible wonder of nature, and witness these bioluminescent creatures in their natural habitat.