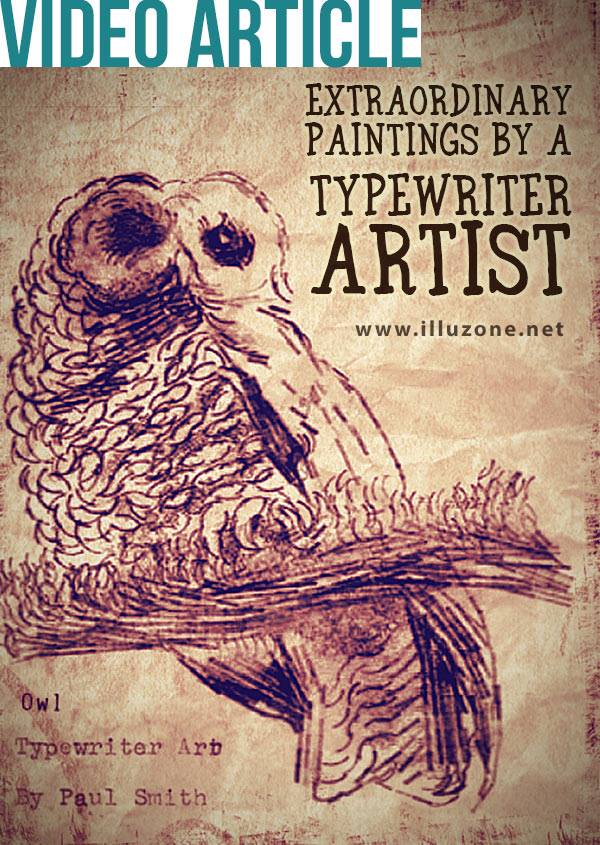 [dropcap]B[/dropcap]orn in 1921, Paul Smith was diagnosed with cerebral palsy, a severe disability that affects motor abilities and strength. During a time when people with cerebral palsy received little support and garnered little attention from the community, Paul lived a full life painting intricate pictures with what, at the time, was a common office machine – the manual typewriter.

On June 25, 2007 the world lost Paul Smith at the age of 85, but not before several generations had an opportunity to admire his distinct and intricate gallery of art. His legacy continues.

Known worldwide as the “Typewriter Artist,” Paul Smith’s story spans eight decades, seven in which he created typewriter art. Having a severe case of spastic cerebral palsy that affected his speech, his mobility, and his fine motor coordination, Paul’s life began when opportunities were limited.

In his time, Paul was not entitled to a mainstream education – he was not taught to read or write. Physicians were still recommending that children with his form of cerebral palsy be institutionalized. And, medical care wasn’t as progressive.

When Paul was born on September 21, 1921 in Philadelphia, his doctors didn’t believe he would live too long. He beat those odds by living to the ripe old age of 85 – far longer than the average lifespan for an adult male.

It would not be the only time he beat the odds. Though his condition made it difficult for him to grasp pens or pencils, eat, dress, or express his thoughts, he persevered. It took him 16 years to learn to speak – and 32 to learn to walk.

But Paul’s claim to fame – the achievement that has made him a source of inspiration to people in the art community and at all levels of ability – is his mastery of a common office machine as an artistic medium. He paints with a manual typewriter.

And by the time Paul quit creating beautiful pictures with thousands of delicate key strokes, he left behind hundreds of extraordinary, thought-provoking pieces that make a statement not only about their subject matter, but especially about how they were created.

HOW IT ALL STARTED

Paul’s family moved from Philadelphia to Hollywood, Florida, near trains and train tracks – common subjects of his earlier art creations. Paul developed an interest in creating typewriter art when he was 11-years-old and had started toying with a typewriter his neighbor had discarded. His creations became an outlet for a child that turned to new ways to express himself since being non-verbal he could not easily convey his feelings to others. Because he could not easily grip artist’s tools such as pencils, pens, markers, pastels or paint brushes, he turned to the typewriter.

The subjects of Paul’s art were publicly recognizable. He enjoyed creating pictures of animals, still lifes, nature, war scenes, spiritual symbols, and outdoor scenes. His works included his childhood fascination with trains; his affinity towards a squirrel he befriended; spiritual leaders such as the Pope, Jesus and Mother Theresa; war scenes and country hero’s. He also created pictures of well-known art he admired, including Leonardo da Vinci’s “Mona Lisa,” Auguste Rodin’s “The Thinker,” and Emanuel Gottlieb Leutze’s “Washington Crossing the Delaware.”

It’s not so much the subject that is remarkable about Paul’s work, it’s the painstaking skill of using symbols on a typewriter to form perfect replicas of existing work, and innovative representations of his surroundings.

Paul’s images, perhaps surprisingly, were created using only a handful of symbol keys – !, @, #, %, ^, _, (, &, ) – which were accessible along the top row of his typewriter keyboard. Remarkable, when a person considers that manual typewriters required the ribbons to be positioned, the roller to be adjusted, and the paper to be secured. Typewriters, of that era, left no room for error since erasing mistaken keystrokes was not a clean option.

As he typed, he would secure the shift key in a locked position to make sure that he didn’t inadvertently type numbers. He used his left hand to steady his right. Different symbols created the look of varied textures, and depending on the look Paul was attempting to achieve, he would adjust the spacing to type the symbols in short proximity, or far. And, he adjusted the roller to perfect spaces between lines.

As technology advanced, his art evolved. The invention of color typewriter ribbons, gave Paul the flexibility to layer in color. He would soon press his thumb on the ribbon to create shade. By using keystrokes, repetition, and an eraser, his pictures took on less of a pen-and-ink look and more of a pastel and charcoal appearance. He would preplan his approach and develop a scaling system to reproduce photographs.

Depending on the nature of a picture – how large it was, and how complex – it could take anywhere from two weeks to three months to complete one piece. He worked, on average, a couple hours every day on his art. After all of that work, one wouldn’t blame Paul if he sought to sell his work, but by all accounts, he would give away his pieces. As his distinctive artform gained intrique from others, the number of orders for artwork increased.

He would sign his work by typing his name, usually along the bottom right corner of the page.

There’s also little evidence that Paul’s work was widely published outside of a handful of online references and book mentions. For him, creating art was a leisurely pursuit and a form of expression. He didn’t believe he had talent, as much as he believed his talent was a special gift not produced by effort. To the art world, he set a high bar for typewriter artists that many have tried to match, but few are able to replicate.

Today, we see individuals with disabilities participating in the arts in ways Paul could likely not imagine. Computers and software technologies have long replaced typewriters. They have opened new avenues for art, photography, filmmaking, and design. Technological tools are available today that have leveled the playing field for artists, no matter what their physical abilities are. But Paul had no such benefits as he developed and refined his techniques; he simply had his fingers and an office machine that today, many young people would not recognize.

It’s impossible to know how many pictures Paul created during his long life – some estimate over 400 pieces. That work remains an inspiration to artists everywhere; especially among those that accommodate for disability. Paul’s work proves that with some patience and ingenuity, all things are possible.

HIS LATER LIFE AND WORK

Although Paul would type several hours a day for nearly 70 years, his career as a typewriter artist would succomb to the effects of aging, not to his cerebral palsy. According to reports, he developed cataracts, which in 2004 ended his long, prolific career as the typewriter artist.

Ironically, the Internet today has provided Paul’s art with more exposure than technology had allowed, back then. His work is featured on several sites, including those created by other artists that have drawn inspiration from his work and his story.

Additionally, Paul was featured in a handful of news reports that are available on YouTube and on other file sharing sites, including a feature in the 1988 episode of ABC TV’s “Incredible Sunday” with John Davidson.

On June 25, 2007, he died having left behind a unique legacy filled with exceptional imagery. More than that, Paul’s body of work represents what is possible when a person puts their mind to something that others said would be difficult, if not impossible, to achieve.