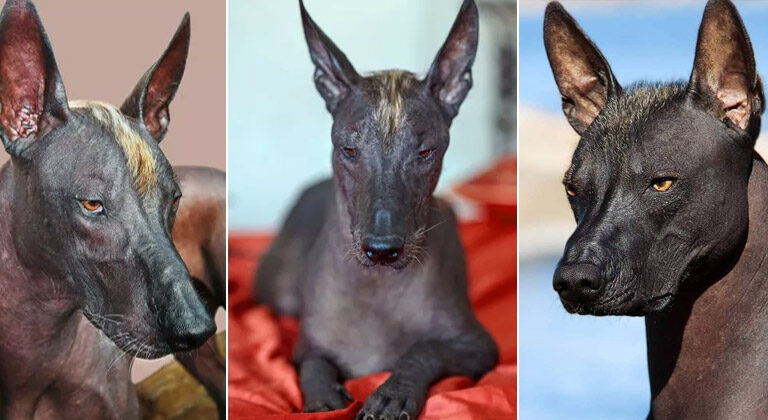 The Xoloitzcuintli (show-low-eats-queen-tlee), or Xolo for short, is a hairless breed of dog. It is also known as the Mexican hairless dog in English-speaking countries.

The Xolo, has often been compared to Anubis, the Egyptian god of the dead and guardian of the underworld.

Xolos are national treasures in Mexico, with a history that goes back at least 3,000 years. Mentions of these “strange hairless dogs” appear in the journals of Columbus and other European explorers.

Archaeological evidence has been found in the tombs of the Colima, Mayan, Toltec, Zapotec, and Aztec Native Americans dating the breed to over 3500 years ago. Ancient Aztecs named the breed for their dog-headed god Xolotl.

Long regarded as guardians and protectors, the indigenous peoples believed that the Xolo would safeguard the home from evil spirits as well as intruders. In ancient times the Xolos were often sacrificed and then buried with their owners to act as guide to the soul on its journey to the underworld. In modern times, Xolos are dedicated watchdogs and companions.

The Xoloitzcuintli is a rare and ancient breed and is sometimes mistakenly confused with the Chinese crested, another hairless dog. Except for the hairlessness, however, the two breeds are quite distinct.

Though independent, the Xolo is smart and sensitive and responds best to gentle, reward-based obedience training. Harsh discipline only frightens him. Because of his athleticism and ingenuity, your fences should be high and secure.

Xolos are very alert and will bark to bring something to the attention of their owners, but they don’t typically bark incessantly. They can make good watchdogs but aren’t the best guard dog because of their reluctance to engage with strangers.

If your Xolo is coated, on the other hand, you can expect them to have all 42 teeth. Sunburn: Even though these pups love the sun, they can burn if they stay out for too long (especially the lighter-colored pups). If you’re going to be out for a while, be sure to slather up your pup with a dog-approved sunscreen.

The family-oriented Xolo can be good with children, especially if they’re brought up with them. They’re not a big fan of having their ears or tail pulled, however, so supervise any interactions with very young children.

While the adult Xolo is known for being composed and relaxed, the Xolo puppy, like many young animals, is more high energy and will require more daily exercise and attention – and lots of chew toys.

Xolos clean themselves like cats, yet they still sweat through their skin and paw pads. You should be checking their feet and cleaning them every few weeks to keep the sebaceous glands free. Bathing your Xoloitzcuintli every 2 weeks is important, because they don’t have any fur.

The dog was a delicacy enjoyed by Aztec kings, say some amateur historians, and the Spaniards ate them nearly to extinction. Others claim they were nothing less than sacred to the indigenous people of Mexico as spiritual guides, companions and healers, as portrayed in Pixar’s Oscar-winning animated film Coco.

If you are allergic to canines or other furry animals, you should give Xolos a chance. Since one of their varieties is completely bald, it discards the chances of fur allergies.

Besides, if anyone in your family has asthma, Xolos will make a safer pet alternative than other animals – Just make sure you are not getting a coated Xolo.