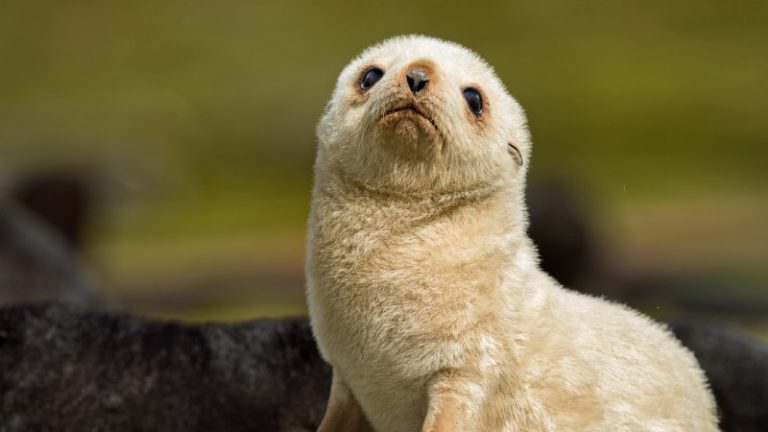 This adorable blonde seal pup was captured on camera in the South Georgia Island by renowned wildlife photographer Roie Galitz. The baby seal was spotted enjoying lots of sunshine on a grassy field, where the photographer managed to obtain these amazing photos.
There are many exceptional animals in the world. Some are born with a distinct skin coloration, in the case of albinism or melanism, which make them very conspicuous in a crowd. This beautiful seal pup is a fascinating example. Due to its blonde skin and fur, the pup is extremely unusual.

Did you know that blond seals make up fewer than 1 % of the fur seal population? Some “abnormal” animals can become outcasts in their colonies, but despite being the odd one, this baby seal is fortunate. It is treated equally by its fellow species and considered a member of the gang.

Sadly, due to their appearance, it is believed blonde seals are at a higher rise of being attacked by predators, as they are more easily spotted in a crowd.

“I spent almost two hours next to this sweet fur seal cub,” Roie Galitz mentioned. “It posed for my camera in such an adorable way that it was difficult to leave him and carry on for other photography opportunities. As you can see, this unique critter enjoys rubbing noses with its companions and, like the others, it loves rolling in the grass in the sunshine.”

“Blonde seals are extremely rare – and this was the only blonde pup in a beach full of ordinary fur seals. You could notice that everyone was treating him absolutely normal.”

“I guess they don’t judge according to color. It looked like a beacon of light, standing out in the crowd. You couldn’t help but fall in love with this sweet little cub,” stated the photographer.