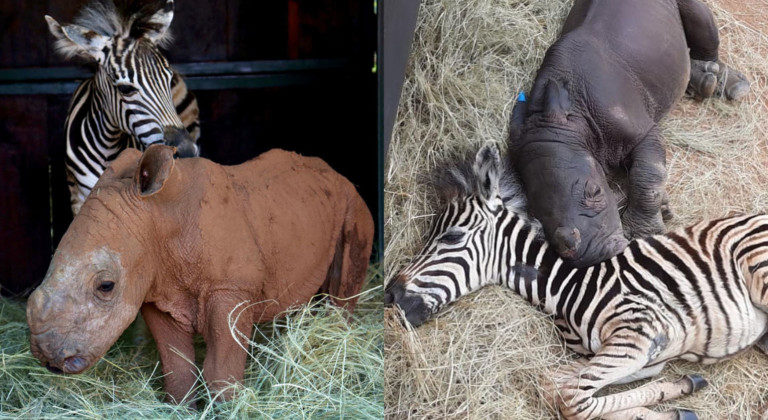 In early December 2021, an orphaned baby rhino was found by rangers in South Africa’s Kruger National Park, fighting to survive and with its umbilical cord still attached. The rhino calf, estimated to be less than a day old when it was discovered, was extremely weak and unable to stand. She had to be transported by helicopter to the Care For Wild Rhino Sanctuary in South Africa, where she was rushed to the intensive care unit (ICU).

Just some weeks before, a zebra foal was found motionless and barely breathing in Kruger National Park, after heavy rains and storms. Named Modjadji, the baby zebra was thought to be just a week old and was admitted to the sanctuary’s ICU to be treated for septicaemia and anemia. In the wild, these two adorable babies would probably never have met. But at the Care For Wild Rhino Sanctuary, the baby rhino and zebra foal have become unlikely friends and are helping each other heal and grow stronger.

When rangers found Daisy during their routine operation, the baby’s mother was nowhere to be seen. Although the exact cause of Daisy’s abandonment is not known, it is thought her mother was possibly a victim of poachers. Indeed, the baby rhino was discovered during a very “distressing week” where dozens of rhinos were ruthlessly killed by poachers in South Africa within a matter of days. Poachers only collect the mothers’ horns which are sought-after in Asian countries such as China, and often leave behind the calves to fend for themselves.

Luckily, both of these orphaned babies pulled through after being provided with round-the-clock care and feeding. Daisy required other treatments to boost her immune system and help her maintain her body temperature, since she was too young when she was found and did not receive colostrum from her mother.

On the path to her own recovery, Modjajdi became fast friends with Daisy when she arrived, and the affectionate zebra took it upon herself to become the baby rhino’s companion and protector. After a month together, Modjadji and Daisy are more like sisters. Wherever Daisy is, Modjadji isn’t far behind.
“As they grew stronger and braver, their curiosity got the best of them, and they started interacting with each other,” Louwhen Bowker, media contact at Care For Wild Rhino Sanctuary said.

“Rhinos are very social animals and require companionship. Modjadji is fantastic company for Daisy and very affectionate towards her. They cuddle together at night which gives Daisy comfort and security. She is a friend that can be with her 24/7 and this in turn helps to prevent too much human contact with Daisy.”

“Modjadji is fantastic company for Daisy and very affectionate towards her. They cuddle together at night which gives Daisy comfort and security.”

Over the next weeks and months, these two babies have formed an unwavering bond of friendship, finding comfort in each other and helping them in their healing journey. Modjadji’s gentle and caring company is also essential since Daisy is too weak and vulnerable to be introduced to the other orphaned rhinos at the sanctuary.
“It will take some time before she is strong enough to handle the other orphans,” Rachael Pfeiffer, from the Care for Wild Rhino Sanctuary explained. “Closest in age to her is Aquazi, whom she met in the ICU, but he just wanted to play and was a bit too boisterous for her at this stage. This is why Modjadji is so important.”

The Care for Wild Rhino Sanctuary has been detailing the journey of these two unlikely animal friends on their social media.

“Nothing gets past these two!” the sanctuary wrote on January 28th. “During their playtime outside the ICU, Modjadji decided to show Daisy where the milk is made! These two friends are becoming very mischievous…”

“The relationship between these two babies is so special,” the sanctuary wrote on March 30th. “Daisy really relies on Modjadji for support and friendship. Modjadji is so affectionate and protective of her friend.

“Just like most babies, Daisy and Modjadji simply adore their milk! They are both just over 3 months old and fed every 2-3 hours throughout the day and night. Daisy drinks just under 1L at every feed! Whilst Daisy is the louder drinker, Modjadji is more delicate and a lot quieter!” the sanctuary mentioned on their Instagram account.

“During their playtime outside the ICU, Modjadji decided to show Daisy where the milk is made! These two friends are becoming very mischievous…”

“Modjadji is so sweet and gentle and loves to cuddle. She is always so affectionate with little Daisy but today she came up to caregiver Will and just lent in for a hug.”

Care For Wild Rhino Sanctuary is hoping to eventually release Daisy, Modjadji, and the other orphaned rhinos back into the wild after they have sufficiently recovered and matured. This is part of the sanctuary’s vision of promoting the “conservation of viable Black and White rhino breeding populations in protected areas through community involvement and the integration of sustainable solutions.”

However, the special relationship and bond these two orphaned babies have developed during their rehabilitation journey will be something that will continue to live on.

The sanctuary has a history of bringing unlikely animal friends together, for instance, it previously helped foster a friendship between a rescued baby black rhino and a rescued goat.
“Rhino rescue and rehabilitation is not a quick process,” Pfeiffer explained. “They drink milk until around the age of 17 months. Daisy will enter the rewilding programme at around the age of 3 years. She will only become sexually mature at around 5-6 years old.”

Learn more about the Care for Wild Rhino Sanctuary and the fabulous work they are doing in rehabilitating and protecting sick and injured animals.
Check them out on their social media to continue to follow Modjadji’s and Daisy’s lives:
Instagram | Facebook | Youtube