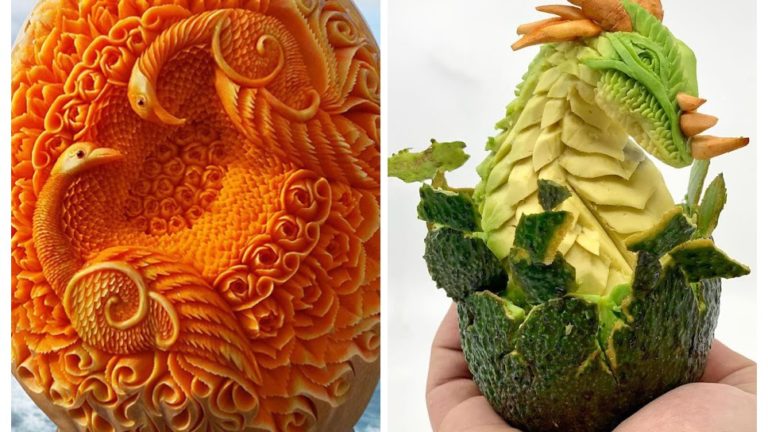 Famous for his award-winning food sculptures, master fruit carver Daniele Barresi transforms a variety of fruits and vegetables into exquisite sculptures. The Italian-trained chef, who is now based in Sydney, creates intricate patterns and arrangements using everything from melons to broccoli and cheese. He can carve out elaborate sculptures of animals and embroidery from fruits in a matter of a few hours. Although he loves to carve birds, flowers and patterns, the artist also receives commissions from brands to do custom carvings.

See below the artist’s sensational food carving designs and arrangements.

With a pair of skilled hands and a set of tools like knives, peelers, scalpels and melon ballers, Barresi creates marvelous and imaginative works of art that look too good to be eaten, but rather to just be admired in an exhibition.

The talented fruit carver talks of his food sculptures in an almost spiritual manner. “When I touch my knife, my mind surrenders to the heart and transmits directly to the hands, giving different forms to the decorations. It’s like magic.”

Barresi’s carving journey started more than 11 years ago, after he noticed some intricately carved pumpkins at a wedding. He began practicing carving as soon as he got home. Over the course of a year, he went through over 1000 pumpkins while learning. His wife has been his “harshest critic” since, as the artist mentions, “She won’t just tell me she likes it until she thinks it’s perfect!”

As a two-time world champion carver, he earned the World Association of Chefs’ Societies honor in two consecutive years, namely in 2013 and 2014. Barresi opened a culinary school to teach 300 students every year in Italy, but afterwards he relocated to Australia to share his skills with the rest of the world.

He also frequently uses soap for his carvings of fish, jewelry and floral displays. In addition to his fruit carvings, Barresi manages DB Resin Products, a company that produces powders, paste, glitter and silicone to “help other artists.”

While Barresi carves a variety of fruits, vegetables and some other materials, he prefers to work on watermelons. He also claims that he can sculpt a strawberry in just 30 minutes, while larger pieces can take between 6 and 8 hours.

“Watermelons will always be my favorite things to carve because they are bigger, so they offer you more room to work with,” the artist mentions. “But they are also the fruit of my home nation — with the colors red, white and green.”

The food artist has been transforming broccoli into legendary creatures, zucchini into flowers, and potatoes into people. But some of his most fun and striking designs are those carved into the soft, creamy flesh of avocados, and comprises carvings of birds, embroidery and even skulls. Sometimes, he even uses the bulbous seed of the fruit to carefully craft food art that is complex, delicate, and—at times—even funny.

Barresi has been creating fun seasonal images and even exploring on the more playful side, sculpting tiny creatures from the soft flesh of the fruit and even chiseling images into the pit. One of his food artworks is a hilarious representation of a popular TikTok star named Khaby Lame, and the masterpiece was called “Avokhaby.” In other instances, the artist creates stunning, elaborate patterns with precise cuts from the fruit to make some very appealing avocado toast.