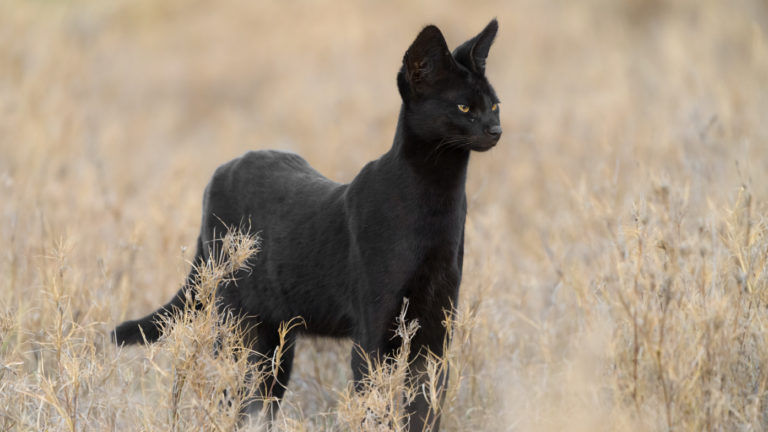 Servals are wildcats that usually sport a cheetah-like coat with black spots, bands and stripes. But some dark-furred individuals can occur due to melanism, which is a unique trait carried by a recessive gene that causes excess production of the dark-colored pigment melanin in skin, feathers, and hair. Although serval cats are found in most African countries south of the Sahara, there are only four known locations on the east of the continent where one might come across a population of black servals.

Some sightings of black servals from Kenya and Tanzania have provided further evidence that there is in fact a healthy population of these unusually colored cats hiding out in the grasslands in East Africa. However, servals are notoriously elusive, so it can be a tricky task to determine exactly how many melanistic cats are roaming East Africa. It is said that if a black cat crosses one’s path, this can bring misfortune. Indeed, black cats have often been regarded as a bad omen, and have been associated with witchcraft and evil. Nonetheless, spotting a melanistic serval cat in the wild is actually more like a stroke of good luck.

Manja, a gorgeous melanistic serval cat, was sighted in the grasslands of Namiri Plains in Serengeti National Park, Tanzania. The black serval cat is named “Manja” after the guide and naturalist of Asilia Africa (a safari company) who was the first to spot him.

What a ‘normal’ serval looks like, with tawny-coloured fur and bold black or dark brown spots, bands and stripes:

According to the photographer Marc Mol, up until Manja was sighted, there were believed to have been only four other melanistic Servals seen in the wild in East Africa.
“In nearly 40 years and 50+ visits to this wonderful dark continent, never would I have thought such a sight possible. It’s difficult at the best of times to locate your normal “garden variety” serval, so finding this small cat was never going to be a simple task, and one I specifically spent 3 weeks tracking. Such a rare and special treat to witness this magical small predator hunting, gotta love those piercing golden eyes!” the photographer mentioned on his blog.

Manja is not only a rare sighting due to his melanism or because he inhabits an uncommon location for servals, but also because he has chosen the Namiri Plains to settle in. Known as the big cat haven of the Serengeti, the Namiri Plains is a territory ruled by lions and cheetahs, so it takes experience, knowledge and courage for our bold little cat to stand his ground.

Melanism affects at least 13 of the 37 known feline species worldwide, with Black panthers being perhaps the most famous of the melanistic cats. Panthers are not a separate species, but this is rather an umbrella term used to categorize dark-coated leopards in Africa and Asia, and jaguars in South America.

Manja’s dark coat is due to its melanistic condition, which results in the serval’s usually golden, brown spotted coat to become completely black. This primarily happens in East Africa, in the highland regions, 2,000 m above sea level. Scientists have termed this phenomenon as ‘thermal melanism hypothesis’, which states that animals who live in higher altitudes — and therefore experience colder temperatures — are more likely to become melanistic. Their dark pigmentation would aid them to absorb more solar radiation, warm up more quickly, and maintain their activity levels. Also, this theory suggests that darker coloration can serve as an adaptive or functional advantage at high altitudes, as this increases protection against the sun’s UV rays.

Melanistic individuals are normally spotted at higher elevations. However, Namiri Plains, at around 1,000 m above sea level, is located considerably lower than the normal altitude at which melanism prevails. Therefore, this theory does not hold in the case of the servals, as the latest sightings of these cats happened in lower-lying areas. It is believed that Manja travelled from the nearby Ngorongoro Crater to establish a new territory. What can be said is that there is still so much to learn about East Africa’s melanistic servals and this remains a mystery to be solved!

Photographer George Benjamin is among the lucky ones to have had an encounter with Manja, back in October 2019.
“[I] can’t describe how mind-blowing this was… and still is,” Benjamin had written on his Instagram. “For context, even seeing a “normal” serval is tough. They’re shy, secretive cats that tend to live in tall grasses – the perfect combination for staying unnoticed. Every time I’ve been privileged enough to see them, my heart skips a beat.”

At the time, there was no guarantee that Manja would be able to produce melanistic kittens, should he find a mate. But in July 2020, it was reported that Manja had in fact secured a mate (due to his charming good looks!) and in mid-September 2020, melanistic serval kittens were born – an extremely unusual event to have occurred.

The most recent sighting was on the 6th August 2021 by wildlife photographer Will Burrard-Lucas and his guide Keko, who were out in the plains doing some shots. Keko caught a glimpse of what he thought was a black serval. After searching the surroundings, they were amazed to find a black serval kitten, who was being quite shy and hiding in the bushes.

Over the next few days, Will and Keko went back to the area in the hope of having a better view of the kitten. It was then that they stumbled upon the wonderful sighting of a ‘normal’ female serval and her two kittens, one with the ‘normal’ dark-spotted tanned fur and the other completely black. Indeed, Manja had produced his third melanistic serval kitten with his companion!

Manja is now not only a celebrity in the Serengeti, but all around the world, and he has been featured in several esteemed publications, along with his images shared across social media platforms.