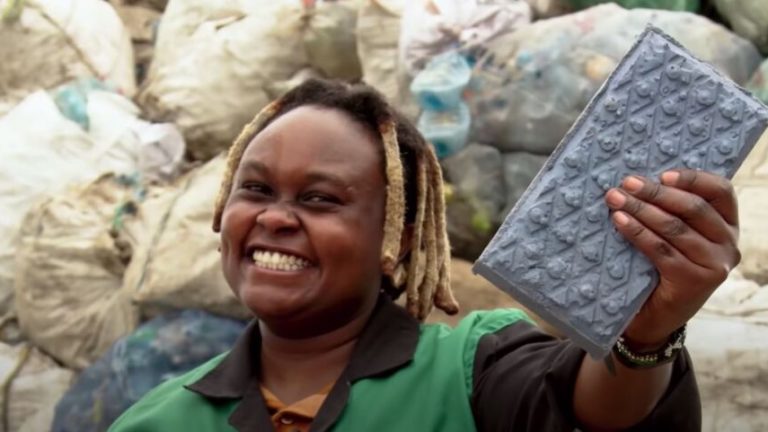 1.15 to 2.41 million tonnes – That’s the amount of plastic that has been estimated to enter the ocean from rivers each year! More than half of this plastic is less dense than the water, which results in it not sinking when it reaches the sea. The more buoyant and tougher plastics are more resilient and as such, are transported over longer distances. The Great Pacific Garbage Patch is a colossal accumulation of marine debris in the North Pacific Ocean, situated between Hawaii and California and covering twice as much surface area as the state of Texas.

Kenya is one of many countries contributing to the pollution, with hundreds of tons of plastic waste generated every day in the capital, Nairobi, alone. The Dandora landfill, located on the outskirts of the city, extends over an area of about 30 acres or an equivalent of 22 football fields. Despite having attained its capacity and meant to have been shut down some 20 years ago, the site is still operating. Every day, waste pickers are seen plowing through the putrid trash in the landfill, rummaging through the heaps of garbage for plastic.

Nzambi Matee, a 29-year-old Nairobi-based woman entrepreneur and inventor, is the founder of a startup company called Gjenge Makers that transforms plastic waste into sustainable, lightweight and low-cost building materials including paving tiles, manhole covers, and paving blocks that are stronger than concrete material.

A research assisted by the National Environmental Management Agency (NEMA) discovered that more than 50% of cattle near urban areas in Kenya had plastic in their stomachs. With tons of plastic clogging drains, polluting rivers, contaminating animal feed in the region, and some ending up at Dandora landfill, the Kenyan government prohibited the use of plastic bags in 2017. Afterwards, all single-use plastic were also banned in protected natural areas.

However, these bans only concerned the issue of consumer single-use plastic while commercial waste remains a persistent problem within the country. As a result, Kenya is still submerged in this never-ending plastic problem, despite all these measures implemented. One river was so choked with plastic that one could actually walk on water since it had formed an unsinkable base.

This indeed is an alarming health hazard for everyone living in the area, except for Nzambi Matee. In fact, she is thrilled at the sight of waste because she knows it means life for her and her team. As plastic does not sink, this is what captivated Matee’s attention. “I came across this concept of using plastic to [make] building blocks,” she explained.

Fed up of standing on the sidelines and watching the plastic pollution invading the urban areas, Matee decided to take matters into her own hands. In 2017, she quit her job of a data analyst and organized a small laboratory in her mother’s backyard to start creating and testing pavers, which are a combination of plastic and sand. Being a trained materials engineer and schooled in biochemistry, the young woman developed innovative ways of converting plastic waste into sustainable materials. Before that, Matee had also worked as an engineer in Kenya’s oil industry.

Due to her ingenuity, Matee was named a Young Champion of the Earth 2020 Africa winner at the United Nations Environment Programme (UNEP). The award “provides seed funding and mentorship to promising environmentalists as they tackle the world’s most pressing challenges.”

“Our product is almost five to seven times stronger than concrete. There is that waste they cannot process anymore; they cannot recycle. That is what we get,” Matee states.

The young entrepreneur obtains the waste material for free from packaging factories, but she also buys it from other recyclers. Gjenge Makers only uses plastic that cannot be further recycled or was never recyclable in the first place, such as cereal and sandwich bags, shampoo and milk bottles, flip-top lids, ropes, and buckets. As Nzambi Matee mentions, “Essentially companies have to pay to dispose of their waste, so we solved their problem…by taking in off their hands for free.”

These types of plastic waste include:

On the other hand, PET (polyethylene terephthalate) which is frequently used in plastic bottles and can be easily recycled is not being used.

Due to its fibrous nature, the plastic gets transformed into bricks of remarkably durable material and lighter than regular bricks, but also 7 times as strong as concrete. Also, this makes transportation and installation easier and more efficient. Not only are the bricks valued for their quality, but also for how affordable they are – they cost approximately $7.70 per square meter, as opposed to $98 per square yard for concrete produced in the U.S. This makes Gjenge Makers bricks one of the more economical options on the market.

First, the plastic is shredded and mixed with sand, then it goes through a high-temperature extrusion machine that transforms it into a slurry and finally it is compressed into beautiful, colorful bricks. Gjenge Makers can manufacture between 1000 to 1500 paving blocks each day in different shapes, sizes, and colors using a mix of different plastics. According to Matee, the company has already recycled 20 tons of plastic waste since its foundation in 2017 and also generated 120 jobs in Nairobi for garbage collectors, women and youth groups. That means the team has been recycling close to 500 kilograms of plastic waste a day.

Two types of pavers are available for residential and commercial uses. The heavy-duty 60 mm paver is strong enough to be used for parking lots and roads, while the 30 mm light-duty paver can be used for household patios and walkways. The light-duty paver is twice as strong as concrete and exists in a variety of colors. Another noteworthy characteristic is that they have a melting point of over 350°C. As well, the company’s pavers are fully certified by the Kenyan Bureau of Standards.

Several other construction practices have been making use of plastic – roads built with plastic have also been introduced in India, Los Angeles, and South Africa. It is indeed a challenging effort to address and try to resolve this increasing threat of plastic waste.

Contrary to what we may believe, Kenya’s plastic pollution is not just a domestic issue. The situation was aggravated a few years ago when the U.S. had exported more than one billion pounds of plastic waste to 96 nations, including Kenya. In addition, the U.S. government wants to make the shipment of more plastic waste a condition of a proposed trade deal.

Amos Wemanya, a Greenpeace activist, believes Kenya can barely handle its own waste, and now adding the United States’ on top of that seems totally unmanageable. He is rather outspoken about it, “It would be importing more problems if we were to allow this U.S.-Kenya trade deal to be used as a way of dumping plastic waste on the African continent.”

Matee shares the same opinion about countries keeping their waste in their own backyards. She is determined to hold up her end of the bargain on what she calls her triple threat:
“The more we recycle the plastic, the more we produce affordable housing… the more we created more employment for the youth,” she says.

“It is absurd that we still have this problem of providing decent shelter – a basic human need,” mentions Nzambi Matee. “Plastic is a material that is misused and misunderstood. The potential is enormous, but its after life can be disastrous.”
As stated by the young entrepreneur, plastic has in fact an incredible potential to work with it.

Soraya Smaoun, who specializes in industrial production techniques with UNEP (United Nations Environment Programme), adds “We must rethink how we manufacture industrial products and deal with them at the end of their useful life.”
“Nzambi Matee’s innovation in the construction sector highlights the economic and environmental opportunities when we move from a linear economy, where products, once used, are discarded, to a circular one, where products and materials continue in the system for as long as possible.”

According to UNEP, people purchase 1 million plastic drinking bottles in every minute around the globe while up to 5 trillion single-use plastic bags are used annually.

However, it was not a smooth road for Matee. The young woman encountered several challenges on her path while setting up her company. “I jumped in, off a cliff without even a parachute. I was building it as I was falling down. But isn’t that how great things are done?”, the young entrepreneur relates.
Trying to figure out whether she could really convert all these waste material into usable construction bricks was not a simple task. But when it did finally succeed, “that was the best day ever,” Matee says. “It took us about nine months just to make one brick.”

In her mother’s backyard where she had arranged a small laboratory, she began experimenting and through trial and error, she and her team learned which plastics bind better together than others. Throughout all this process, she also endured complaints from her neighbours regarding the noisy machine she was using for her experimentation.

But making just one brick wasn’t enough. That was not an issue for Matee though. For someone who likes to get her hands dirty, it was yet another challenge to confront. After that, she undertook the development of a prototype machinery that would allow her to mass produce the paving bricks.
“Once we know how to make one paver, we need to know how to make 1,000 pavers,” she explained.

In her resolution to carry out her mission, Matee had also stopped associating with her friends for a year. “I shut down my social life for a year, and put all my savings into this,” she said. “My friends were worried.”

When Matee won a scholarship to attend a social entrepreneurship training programme in the United States of America, she saw an opportunity to boost her project. During her short trip to the USA, she used the material labs in the University of Colorado Boulder to further test and refine the ratios of sand to plastic.

Matee shares her passion for saving and preserving the environment with many other young Kenyans. However, it’s not only about words, but she is hoping that through her utter dedication, enthusiasm and effort she will be able to turn those mountains of trash in Dandora landfill into mere hills. Having entrepreneurs like Matee is a true source of inspiration and hope in tackling the worldwide plastic pollution crisis.