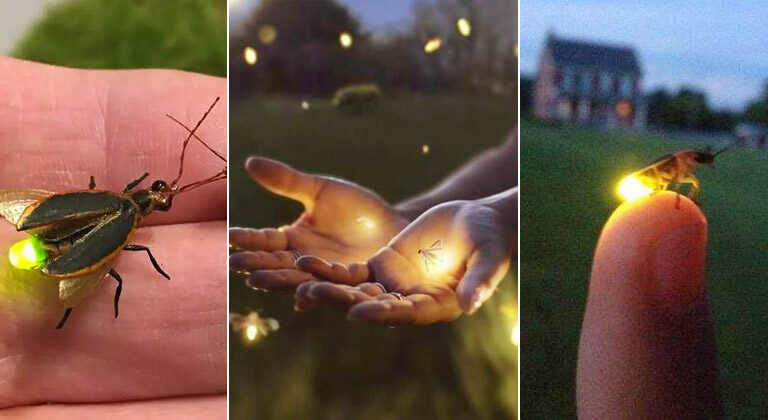 The disappearance of fireflies is thought to be caused by human habitat destruction, increasing light pollution from construction, and increased traffic. However, there are a few things you can do to support the resurgence of fireflies in your region.

Since scientists have just recently started researching firefly populations and the available information is still unclear, none of these measures have been demonstrated to be effective. However, evidence suggests that the decline in firefly populations is likely caused by human activity, light pollution, and harmful chemicals. If you follow these instructions, hopefully your yard will start to gleam again over the summer.

At night, turn off the outdoor lighting

Fireflies flash their lights to communicate with one another, attract mates, and alert danger. While research is still in its early stages, it appears that human light pollution may interfere with fireflies’ flashes, making it more difficult for them to signal mates and reproduce. As a result, fewer fireflies are breeding, which decreases their population over time. By shutting off external and garden lighting and drawing your curtains at night so that indoor light doesn’t overly illuminate your yard, you can create a paradise for fireflies.

Allow natural litter and logs to pile up

The larvae of some firefly species grow up in rotting logs and the litter that gathers beneath the forest canopy. Plant some trees in your yard to promote their growth. If you have trees in your yard, think about leaving some natural debris around them to provide a growing environment for firefly larvae as their go through their life cycle.

Your landscape should have water features

The majority of firefly species have one thing in common: they prefer marshy environments and locations with stagnant water to thrive. Fireflies can thrive in ponds, streams, and rivers, but even a little area with stagnant water can draw them together. You’re more likely to observe fireflies at night if you build a small pond or direct a tiny stream to pass through your property. Chemically treated swimming pools aren’t a good replacement since smaller insects, grubs, and snails, which are abundant in natural ponds and streams but cannot survive in chlorine conditions, are thought to be eaten by fireflies.

Features in water gardens are advantageous to fireflies.

Chemical weed killers and pesticides are likely to have a detrimental impact on firefly populations as well. Fireflies and their larvae can come into contact with other poisoned insects or might consume the toxins from sprayed plants. By avoiding pesticide use on your lawn, you can encourage the growth of firefly populations.

While there haven’t been any official studies done explicitly looking at how lawn pesticides affect fireflies. These substances might be detrimental to firefly larvae and adults, according to two known studies that infer this possibility. According to the first study, lawn pesticides are poisonous to insects in lawns where firefly larvae are present [1]. The other study demonstrates how dangerous lawn herbicides are to the food that feeds firefly larvae [2]. Both instances demonstrate how lawn chemicals can seriously harm fireflies at all phases of development.

The best thing you can do to promote fireflies is to avoid using broad range pesticides and lawn chemicals. Firefly larvae are nature’s built-in pest control since they eat other unwelcome insects.

The extinction of the dusky seaside sparrow, which was exclusive to the salt marshes of Merritt Island in Florida, is a significant illustration of how pesticide overuse has impacted a particular community. Due to rapid ecosystem change brought on by human development and the DDT spraying of its habitat to control mosquitoes, the bird was unable to adapt and eventually went extinct.

The time of night when fireflies are active, flashing, and mating is when many communities overspray for mosquitoes. Populations of fireflies may be wiped out by such excessive spraying. These same communities frequently don’t apply more efficient mosquito control measures, like using mosquito larvacides to stop mosquito growth and development in drainage ditches and neighborhood initiatives to eliminate standing water, particularly in swimming pools.
Communities can actually save money and improve mosquito control, inflicting less harm to firefly species and other small animals, by promoting all-encompassing insect control initiatives and opposing spraying during firefly activity times.

Make use of organic fertilizers

Although there haven’t been any convincing studies, it’s plausible that chemical fertilizers may also be hazardous to firefly populations—especially since many of the same dangerous compounds found in pesticides are also present in chemical fertilizers. Your yard may become a healthier environment for fireflies if you use natural fertilizers.

Since fireflies spend the majority of the day on the ground, routine lawn cutting may upset nearby firefly populations. Even though you might believe that keeping your lawn mowed is necessary for aesthetic reasons, think about including certain sections of long grasses into your landscaping. Long grasses are where fireflies prefer to live, therefore creating such a habitat in your yard can increase their population.

Many kinds of firefly can find an excellent home in fast-growing pine and native trees. Terry Lynch, a naturalist who has researched fireflies for a long time, suggests pine trees because they offer shade and the low light area created by a canopy actually lengthens the time fireflies have to choose a mate. A nice home for earthworms and other small animals, which firefly larvae feed on, can be found in the litter created by pine trees if it is allowed to accumulate.

Don’t add earthworms to your yard.

What exactly is wrong with worms? For many of us, finding earthworms in our gardens, behind rocks, and on sidewalks after rainstorms is just a fact of life. We rarely consider challenging the existence of worms or their influence on fireflies.

The reality is that none of the northern United States or Canada are home to native earthworms. Any worms that may have existed here at one time were exterminated by the last glacier. A critter that dwells in the topsoil would have a difficult time surviving the weight, scraping, and sedimentary deposits of a mile-thick chunk of ice.

Earthworms have an effect on organisms other than just plants. The habitat and food availability of insects like fireflies are impacted by the decrease in plant diversity and leaf litter, which impacts the food chain upward and reduces the food supply for reptiles, amphibians, birds, and small mammals.

The earthworms that are currently present in the area are of European origin (they are the same variety that can be purchased at a bait store), were introduced by settlers some 300 years ago, and have been traveling west with human assistance ever since. In these glaciated regions, where there haven’t been any earthworms for about 12,000 years, these non-native earthworms are causing some ecological impacts. On the East coast of North America, there are native earthworm populations, although they are sparse and confined to specific areas. Recent studies conducted in that area have revealed that these alien earthworm species are also having an adverse impact on native earthworm species.

Discuss with your neighbors.

What you do in your own yard will assist if you live in a suburban area near to others, but you can increase the amount of habitat for fireflies by involving your neighbors in your efforts. Inform your neighbors of your worry for the declining numbers of fireflies and ask them what they can do to help. You could further improve the environment for fireflies in your region if you can persuade just one or two neighbors on your street.

All throughout the world, fireflies are becoming extinct. But you may still make a difference in a little way by taking a few simple actions. On your land, leave some space for the wild—low-hanging trees, forest debris, and long grasses. They all provide inviting habitats for fireflies. Ponds and streams are essential for firefly populations, and you may increase their numbers by using fewer chemical pesticides and fertilizers, cutting back on nighttime lighting in your yard, and minimizing the amount of light in your yard overall. If you use these suggestions, there’s a chance that you’ll witness a rise in the number of fireflies in your neighborhood.