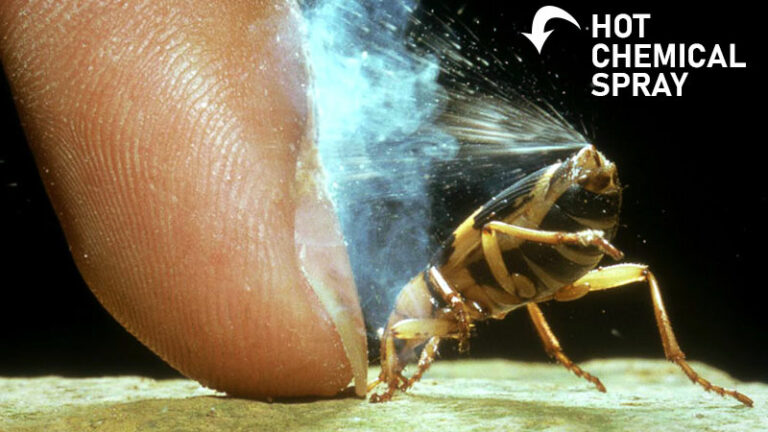 Asian bombardier beetles are a unique group of insects known for their impressive defense mechanism against predators. These beetles have the ability to shoot a hot chemical spray from their abdomens, which can deter would-be attackers and give the beetle time to escape.

The spray is created by storing two separate chemicals, hydrogen peroxide and hydroquinones, in chambers within the beetle’s body. These chemicals are then mixed together just before being ejected through a nozzle located at the end of the beetle’s abdomen. When the chemicals come into contact with each other, they react to create a highly reactive and hot spray that can reach temperatures of up to 212 degrees Fahrenheit. The chemical reaction also produces quinones and oxygen, which give the spray its characteristic hot and noxious smell.

Not only is the spray hot enough to cause pain and discomfort to predators, but it also has a nauseating smell that can induce vomiting, making it even more effective at deterring predators. The spray is so hot and distasteful that some predators have been known to drop the beetle and run away immediately.

It’s important to note that this defense mechanism is not exclusive to Asian bombardier beetles, but can also be found in other species of bombardier beetles found in different parts of the world. All of them use the same mechanism of storing the two chemicals and mixing them just before ejection.

Asian bombardier beetles are not only known for their unique defense mechanism of ejecting a hot chemical spray, but also for their diverse habitat and diet. These beetles can be found in a variety of environments, from forests to grasslands, and can even survive in urban areas.

One interesting aspect of their diet is that some species of Asian bombardier beetles are known to feed on other insects, including other beetles. This is a rare example of intraspecific predation, where an organism feeds on members of its own species.

Another fascinating aspect of these beetles is their mating behavior. Male Asian bombardier beetles have been observed using their chemical spray to mark their territory and attract females. The smell of the spray is believed to be an attractive pheromone for females.

The Asian bombardier beetles are a prime example of the incredible adaptations that can be found in the natural world. Their ability to defend themselves with a hot chemical spray is just one of the many ways that these beetles have evolved to survive in their environment. In conclusion, the Asian bombardier beetles are an impressive group of insects with an extraordinary defense mechanism that can deter predators and give the beetles time to escape. This defense mechanism is a remarkable example of the chemical engineering that can be found in nature, where the beetles have evolved to store, mix and eject these two specific chemicals to create a unique and effective defense spray.