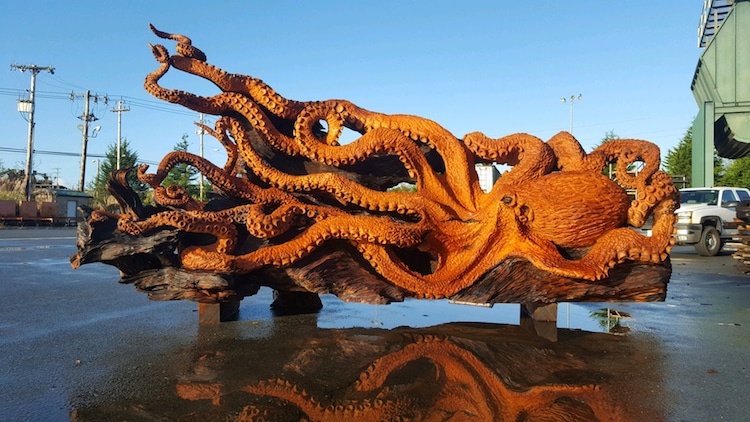 The American chainsaw artist and woodcarver Jeffrey Michael Samudosky has been creating elaborate carving artworks from a variety of Pacific Northwest trees. Based in Gig Harbor, Washington, Samudosky is a self-taught carver who started his company, JMS Wood Sculpture, in 1998. Since he had started his career, Samudosky has appeared on the Discovery Channel and participated in competitions around the world.

One of his most recent works is a Redwood snag that was transformed into a Giant Pacific Octopus (Enteroctopus dofleini), with its gigantic tentacles stretching out and revealing finer details at the ends. The cephalopod’s tentacles curve and twist their way across areas that the artist left uncarved, including the entire back of the trunk, which gives the illusion that the octopus is on top of the tree, rather than a part of it.

In the photos below, you can see the progression of his work as the dead redwood trunk is wonderfully transformed into the colossal octopus.
All images credit via JMS Wood Sculpture

The magnificence of the sculpture is visible in the incredible amount of details included, from the long tentacles to rounded suckers. Indeed, the massive sculpture looks impressive, measuring 14 feet long, 9 feet tall and weighing about 3,500 pounds, and it almost appears as if it’s swimming through water. The redwood trunk was provided by Redwood Burl. Using chainsaws of varying sizes, grinders, sanding tools, dremels and chisels, Samudosky painstakingly worked to carve this remarkable sea creature sculpture to perfection.

Born and raised in Shelton, Connecticut, Jeff studied art and photography in high school. After graduating, he traveled the continent as an Outward Bound instructor, ice climber, and whitewater rafting guide. Before becoming a chainsaw artist, Samudosky trained as an Alpine mountaineering guide in Jackson Hole, Wyoming, and which lead him to become certified as a wilderness emergency medical technician.

Unfortunately, his life changed drastically when a snowboarding accident left him with a broken back and no feeling in his legs. However, he made a full recovery after eight months and regained mobility in his legs. Being the energetic and resilient man that he is, Samudosky decided to conquer his fears and begin snowboarding again.

Little did he know that a trip to the mountains in Vermont would pave the way towards a new hobby and even becoming his full-time career. During his trip, some wood carvings along the side of a road caught his attention and he immediately thought to himself, “I could do that.” From there, he taught himself the artistic and woodworking skills, and then, his company JMS Wood Sculpture was born in 1998.

His business has allowed him to live all over the country and travel all over the world. Being in the industry for over 20 years, Samudosky has participated in numerous events and carving competitions worldwide. He appeared alongside his works in various TV shows like Discovery Channel’s Saw Dogs. His incredible sculptures have also been recently featured in different publications, including the National Geographic Kids UK Magazine and Ripley’s Odd is Art.

Samudosky takes delight in sculpting larger-than-life replicas of marine and wildlife animals such as horses, wolves and eagles. Previously, he has carved deep sea diving helmets, rams, and bears twice his size. Aside from marine and wildlife animals, he is also passionate about creating sculptures with native American motifs. Some pieces have taken up to four years in order to reach his desired level of perfection.

You can discover more of the talented and dedicated woodcarver’s artworks on his website JMS Wood Sculpture and Facebook.