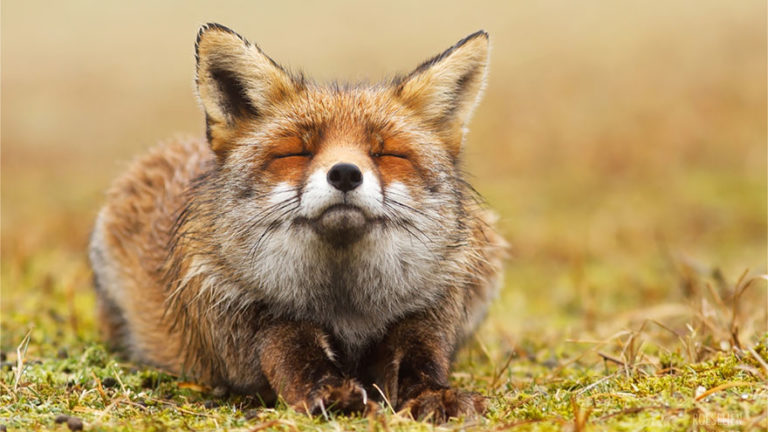 There are over 30 species of fox found all over the world, and among them is the Red fox. It is the most wide-spread carnivore, living in every region of the Northern Hemisphere including Central America, and has also been introduced by humans in Australia. Although foxes are considered as members of the Canidae family, meaning they are related to wolves, jackals and dogs, they in fact have more similarities with cats than dogs.

Famous Dutch nature photographer, Roeselien Raimond, specializes in taking stunning shots of wild foxes. The photos below are amazing depictions of wild foxes in a peaceful mood, just taking the time to enjoy the little things in life. These beautiful creatures definitely have a thing or two to teach us about how to adopt a zen attitude!
Enjoy these while reading some interesting facts about wild foxes too.

As Roeselien Raimond said herself: “I love them best when they’re totally at ease: free from pain, fear, cold, hunger or any other discomfort. Of course they have their duties calling as well. But once that rabbit is consumed, the territory defined and taken care of important things like procreation and upbringing, it’s time to relax.”

“Foxes master this comfortable state of being like no other. Foxes can be fully ‘in the moment’, as if they invented mindfulness themselves. No need for yoga classes or meditation courses, since relaxing is their second nature,” Raimond said.
“They smell the fresh air, feel the warmth of the sun on their fur, close their eyes and then it’s a matter of just being there. Simple as that”

“There’s a contradiction going on when it comes to capturing Zen Foxes: the harder you try, the more you’ll move away from your goal. If you are too eager, an animal will sense that eagerness and will remain alert. They know you want something from them, which makes you a potential danger,” Raimond mentioned.

“But if you manage to take things as they come, by just enjoying the beautiful nature around you, who knows what might happen. I learned to do as foxes do, just being there. And in the meantime, I just enjoy smelling some fresh air and feeling the sun on my skin. And if nothing happens? Well at least you had a good day.”

Same as cats, foxes are also nocturnal. Due to their vertically oriented pupils, they have increased visibility in dim light. They hunt by stalking their prey like cats and pounce on them. Foxes also have sensitive cat-like whiskers which they use to navigate and have spines on their tongues. Gray foxes have semi-retractable claws, making them the only member of the dog family that can climb trees. An additional similarity is their gait – they tread like cats, using the balls of their feet to silently and elegantly stride.

Red foxes have impeccable hearing – it is reported that they can hear a watch ticking from 40 yards away! Their incredible sense of hearing helps them in identifying prey underground. Furthermore, they use the Earth’s magnetic field to locate their prey and this combination makes them somewhat ferocious predators. Foxes are fast and agile, with some of them running up to 42mph, which has led to the phrase “quick like a fox.” Not only that, but they can also jump 3 feet in the air, and climb fences and on top of roofs.

Despite being part of the Canidae family, fox species don’t bark like domestic dogs. Actually, they can produce a variety of sounds — up to 40 it is believed. Their typical warning bark is very short, high-pitched, and usually singular, definitely not a “bow-wow-wow” type sound. The most distinguished one is their scream-like howl, a chilling sound that can send a shiver down your spine. They also have coyote-like howls, whimpers, “snuffing” noises, and a happy call that sounds like a human baby crying. The most common noises made by foxes, especially in a dispute or when playing, is the gekkering which is a series of guttural chattering emitted out of excitement or nervousness.

Foxes are solitary creatures, and they prefer to hunt and sleep alone. But they do live together in a small family unit when they are raising their offsprings in their underground dens. Usually, it is only the dominant female who will have kits, while the other family members will often help in caring for the kits.

A litter of foxes consists of anything between 1 and 11 pups. The foxes live in the den together for seven months while the pups grow. The pups stay with the vixen in the den, and the dog (male) fox goes hunting for food. Their underground dens also provide shelter from predators, such as coyotes, wolves, and bears. During other times of the year, foxes basically live out in the open, and create a little bed for themselves by turning in a tight circle and pressing down on the ground.