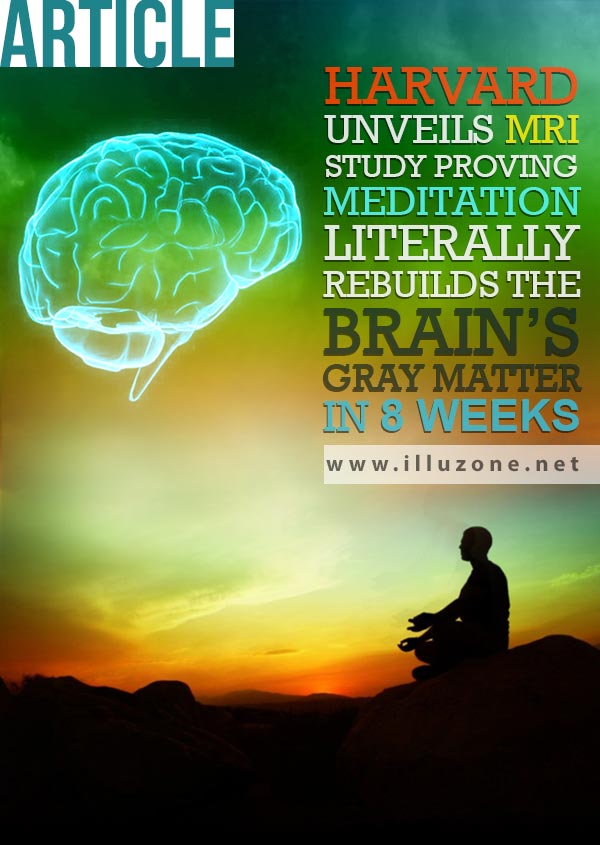 [dropcap]T[/dropcap]est subjects taking part in an 8-week program of mindfulness meditation showed results that astonished even the most experienced neuroscientists at Harvard University.  The study was led by a Harvard-affiliated team of researchers based at Massachusetts General Hospital, and the team’s MRI scans documented for the very first time in medical history how meditation produced massive changes inside the brain’s gray matter.

“Although the practice of meditation is associated with a sense of peacefulness and physical relaxation, practitioners have long claimed that meditation also provides cognitive and psychological benefits that persist throughout the day,” says study senior author Sara Lazar of the MGH Psychiatric Neuroimaging Research Program and a Harvard Medical School instructor in psychology. “This study demonstrates that changes in brain structure may underlie some of these reported improvements and that people are not just feeling better because they are spending time relaxing.”

Sue McGreevey of MGH writes: “Previous studies from Lazar’s group and others found structural differences between the brains of experienced meditation practitioners and individuals with no history of meditation, observing thickening of the cerebral cortex in areas associated with attention and emotional integration. But those investigations could not document that those differences were actually produced by meditation.”  Until now, that is.  The participants spent an average of 27 minutes per day practicing mindfulness exercises, and this is all it took to stimulate a major increase in gray matter density in the hippocampus, the part of the brain associated with self-awareness, compassion, and introspection.

McGreevey adds: “Participant-reported reductions in stress also were correlated with decreased gray-matter density in the amygdala, which is known to play an important role in anxiety and stress. None of these changes were seen in the control group, indicating that they had not resulted merely from the passage of time.”

“It is fascinating to see the brain’s plasticity and that, by practicing meditation, we can play an active role in changing the brain and can increase our well-being and quality of life,” says Britta Hölzel, first author of the paper and a research fellow at MGH and Giessen University in Germany. You can read more about the remarkable study by visiting Harvard.edu.  If this is up your alley then you need to read this: “Listen As Sam Harris Explains How To Tame Your Mind (No Religion Required)”

Well, that is one way of eating! 😃 Unless this

Just casually hanging from a branch with only one