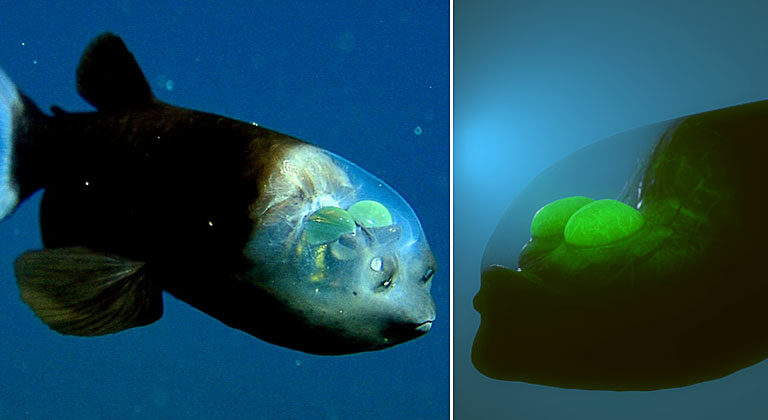 Deep in the dark and mysterious depths of the ocean, there swims a creature unlike any other. With its ghostly, transparent body and glowing, barrel-shaped eyes, the barreleye fish is a true marvel of the sea.

This mysterious fish is a master of stealth and survival, using its upward-facing eyes to scan the depths for bioluminescent prey. Its flexible, see-through head allows it to keep a watchful eye on all sides, ensuring that no tasty morsels escape its grasp.

Despite its ethereal appearance, the barreleye fish is a fierce predator, using its sharp teeth and lightning-fast reflexes to take down even the most elusive prey. So next time you’re exploring the ocean’s depths, keep an eye out for these elusive creatures – you never know when one might pass by.

It is found in the Pacific and Atlantic Oceans. It is typically found at depths of up to about 2,000 feet (600 meters) and is most commonly found in the waters off the coasts of North and South America, as well as Japan and New Zealand. However, it has also been found in other parts of the world, including the Mediterranean Sea, the Indian Ocean, and the Southern Ocean. The barreleye fish is adapted to living in the cold, dark environments of the deep sea and is usually found in areas with a rocky or sandy bottom.

It also has specialized eyes that allow it to see in the poorly lit environments of the deep sea. Its eyes are elongated and tubular in shape, and are oriented upwards and towards the front of its head. These eyes are thought to be adapted for detecting bioluminescent light, which is produced by other deep-sea organisms and is important for the fish’s survival in the dark and poorly lit environments of the deep sea.

The barreleye fish’s eyes are also surrounded by a transparent, flexible head, which allows the fish to see in all directions. This helps the fish to locate prey and avoid predators, and is an important adaptation for survival in the deep sea.

Most individuals reach lengths of only about 6 inches (15 cm), with some reaching lengths of up to about 8 inches (20 cm). The barreleye fish has a transparent, gelatinous head and a cylindrical, elongated body. Its most distinctive feature is its tubular eyes, which are oriented upwards and towards the front of its head. These eyes are thought to be specialized for detecting bioluminescent light, which is important for the fish’s survival in the dark and poorly lit environments of the deep sea. The barreleye fish is found at depths of up to about 2,000 feet (600 meters) in the Pacific and Atlantic Oceans.

This fish is a carnivorous species that feeds on small, bioluminescent creatures. Its diet likely includes small jellyfish, crustaceans, and other deep-sea animals that produce light through a process called bioluminescence. The barreleye fish uses its upward-facing eyes and transparent head to locate prey in the poorly lit environments of the deep sea. Its sharp teeth and lightning-fast reflexes allow it to capture and consume its prey with ease. Despite its small size, the barreleye fish is a formidable predator in its deep-sea habitat.

In general, deep-sea fish are thought to have longer lifespans than shallow-water species due to the relatively stable and low-energy environments in which they live. However, the deep sea is a harsh and challenging environment, and many deep-sea species have specialized adaptations that allow them to survive in these conditions. It is likely that the barreleye fish has a lifespan that is adapted to its deep-sea habitat, but more research is needed to understand the specifics of its biology and behavior.

Despite its strange appearance and unusual habitat, the barreleye fish is not a well-studied species and relatively little is known about its biology and behavior. However, scientists are increasingly interested in studying this and other deep-sea species in order to better understand the mysteries of the ocean’s depths.