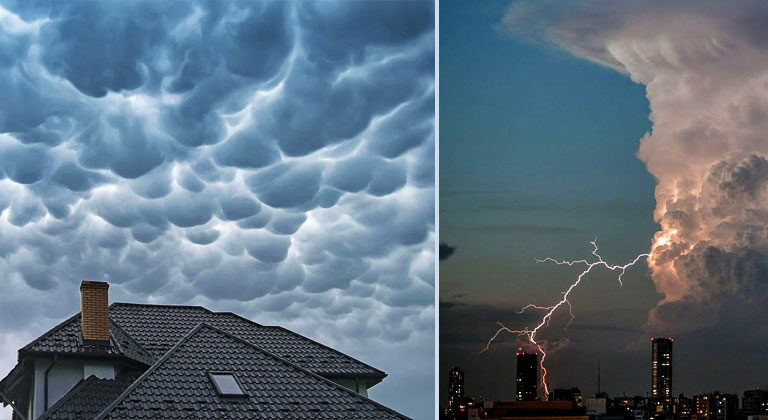 As the guardians of the sky, meteorologists delve deep into the mysteries of the Earth’s atmosphere, unraveling the intricate web of weather patterns and the forces that shape them. Equipped with a diverse array of tools and techniques, these intrepid scientists use their findings to predict the weather and understand the impacts it has on our society and planet.

But it’s not just the winds, rain, and snow that hold their fascination – the ethereal, ever-changing tapestry of clouds also captures their attention. From the thin, wispy tendrils of cirrus to the ominous, anvil-shaped cumulonimbus, these formations play a crucial role in the atmospheric system and are a key focus of meteorologists’ research.

Nephology, the scientific study of clouds, is a subfield of meteorology that delves into the details of these fascinating formations.

Here we present to you 11 different types of cloud formation that you’ve probably never heard about:

1. Cirrus clouds: These are thin, wispy clouds that are often high in the sky. They are made up of ice crystals and are usually white in color.

2. Cumulus clouds: These are large, white, puffy clouds that often look like cotton balls. They can take on various shapes and are usually found at low to mid-levels in the sky.

3. Stratus clouds: These are low, flat clouds that often cover the entire sky and are usually gray in color.

4. Nimbus clouds: These are clouds that are associated with rain or other forms of precipitation. They can be any type of cloud, but they are typically dark and dense.

5. Cumulonimbus clouds: These are large, heavy clouds that are associated with thunderstorms and other severe weather. They can take on a variety of shapes, including an anvil-like appearance.

6. Alto clouds: These are clouds that are found at mid-level altitudes, between 6,500 and 20,000 feet. They include altostratus and altocumulus clouds.

7. Stratocumulus clouds: These are low, lumpy clouds that are often found in rows or patches. They are typically gray or white in color.

8. Nimbostratus clouds: These are clouds that are associated with continuous rain or snow. They are usually gray or dark in color and are often found at low altitudes.

9. Contrails: These are clouds that are formed by the exhaust from aircraft engines. They are thin and wispy and can appear in a variety of shapes.

10. Noctilucent clouds: These are rare clouds that are found at very high altitudes, around 50 to 53 miles above the Earth’s surface. They are often blue or silver in color and are visible at night when the Sun is below the horizon.

11. Mammatus clouds: These are clouds that have a distinctive, pouch-like appearance and are often associated with severe weather.

12. Lenticular clouds: These are lens-shaped clouds that are formed when air flows over a mountain or other obstacle. They are often stationary and can take on a variety of shapes.

13. Shelf clouds: These are clouds that form along the leading edge of a thunderstorm or other weather system. They have a distinctive, curved appearance and are often associated with strong winds.

14. Mares’ tails: These are thin, wispy clouds that are often found high in the sky. They are formed by high-level winds and are often a sign of good weather.

There are also a few other classifications of clouds that are based on their appearance, such as cirrocumulus, stratiformis, and cirrostratus clouds. However, these are not as well-known or commonly observed as the main types of clouds.

The beauty of clouds is truly a wonder to behold. From afar, they can appear as fluffy, cotton-like formations, drifting lazily across the sky. Up close, they can take on all sorts of shapes and forms, from wispy tendrils to dense, swirling masses. And as the sun sets, they can be bathed in a warm, golden light, transforming into a canvas of breathtaking hues.

But perhaps the most striking thing about clouds is their ever-changing nature. No two clouds are ever exactly the same, and they are constantly evolving, shifting and reshaping themselves as the wind carries them across the sky. They are a reminder of the constant movement and transformation that is a part of our world, and the beauty that can be found in even the most fleeting of moments.

So next time you look up at the clouds, take a moment to marvel at their beauty, and the endless variety and wonder that they bring to our world. The end