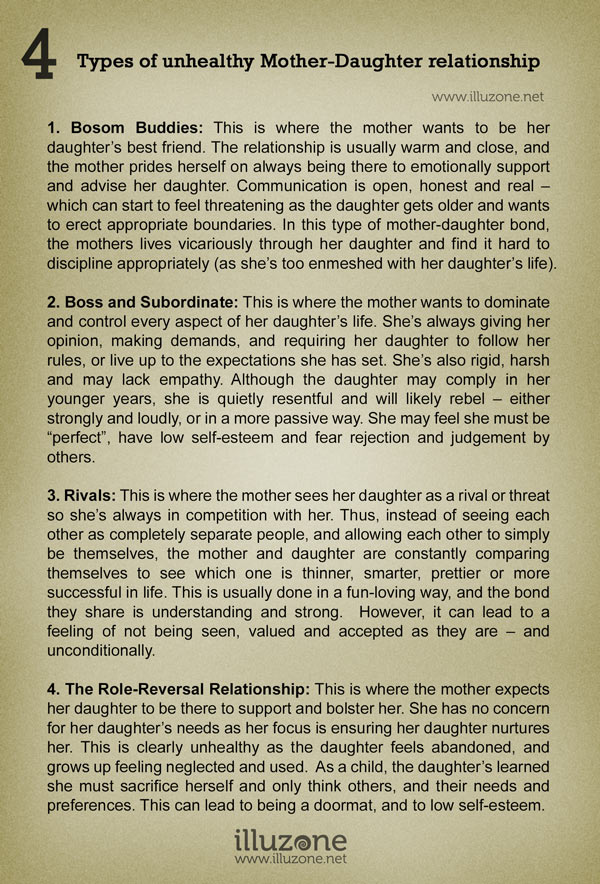 1. Bosom Buddies: This is where the mother wants to be her daughter’s best friend. The relationship is usually warm and close, and the mother prides herself on always being there to emotionally support and advise her daughter. Communication is open, honest and real – which can start to feel threatening as the daughter gets older and wants to erect appropriate boundaries. In this type of mother-daughter bond, the mothers lives vicariously through her daughter and find it hard to discipline appropriately (as she’s too enmeshed with her daughter’s life).

2. Boss and Subordinate: This is where the mother wants to dominate and control every aspect of her daughter’s life. She’s always giving her opinion, making demands, and requiring her daughter to follow her rules, or live up to the expectations she has set. She’s also rigid, harsh and may lack empathy. Although the daughter may comply in her younger years, she is quietly resentful and will likely rebel – either strongly and loudly, or in a more passive way. She may feel she must be “perfect”, have low self-esteem and fear rejection and judgement by others.

3. Rivals: This is where the mother sees her daughter as a rival or threat so she’s always in competition with her. Thus, instead of seeing each other as completely separate people, and allowing each other to simply be themselves, the mother and daughter are constantly comparing themselves to see which one is thinner, smarter, prettier or more successful in life. This is usually done in a fun-loving way, and the bond they share is understanding and strong. However, it can lead to a feeling of not being seen, valued and accepted as they are – and unconditionally.

4. The Role-Reversal Relationship: This is where the mother expects her daughter to be there to support and bolster her. She has no concern for her daughter’s needs as her focus is ensuring her daughter nurtures her. This is clearly unhealthy as the daughter feels abandoned, and grows up feeling neglected and used. As a child, the daughter’s learned she must sacrifice herself and only think others, and their needs and preferences. This can lead to being a doormat, and to low self-esteem.