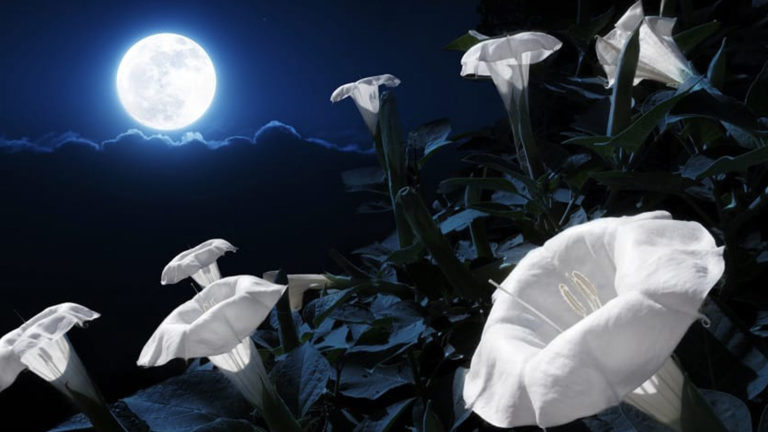 A moon garden is simply a garden that is meant to be enjoyed by the light of the moon, or at nighttime. Moon garden designs include white or lightly colored blooms that open at night, plants that release sweet fragrances at night, and/or plant foliage that adds a unique texture, color or shape at night. Plants with light blooms that open at night will reflect the moonlight, making them pop out against the darkness.

Get started on your moon garden by familiarizing yourself with these 20 moon garden flowers.

Datura plants, also called Jimson weed or thorn apples, are typically cultivated in modern times as a common garden plant due to their beautiful flowers. These plants are sometimes confused with Brugmansia plants, which are ornamental flowering plants sometimes called angel’s trumpets. The flowers on many Datura species are also trumpet-shaped, and they may be pink, white, yellow, or purple. When the flowering season is over, Datura produces capsule fruits covered in spines, thus the name thornapple. They have ornamental leaves, as well, and grow well in many temperate climates.

Angel’s trumpet is best planted in mid-spring when temperatures outdoors no longer drop below 50 degrees Fahrenheit at night. The plant will grow very quickly, often adding between 24 and 36 inches in height a year.

Often confused with Datura as doth produce flowers that are trumpet shaped, but Datura grows lower to the ground while Moonflower grows as a climbing vine. Datura leaves are arrow-shaped; moonflower leaves are heart-shaped. Datura flowers are deeper trumpets than moonflower blooms. Moonflower is a tender perennial vine that can add incredible beauty and powerful fragrance to a night garden. Often grown as an annual outside of its tropical and subtropical growing zones, this vine features large, heart-shaped, dark green leaves on robust, slightly prickly stems. Its trumpet-shaped flowers begin blooming in mid-summer and last until fall. They are typically an iridescent white and grow around 6 inches long and 3 to 6 inches wide.

Cape Jasmine are evergreens with lustrous, dark green foliage. The leaves range from 2 to 4 inches long and serve as a lush background to the large, white flowers the plant produces in spring and summer. Gardenia’s highly fragrant, waxy blooms may be up to 4 inches in diameter. Flowers may be single or double, depending on the cultivar. Cape jasmine plants grow 2 to 6 feet tall and wide, depending on the variety. A native of Asia, Cape jasmine (Gardenia jasminoides), also called common gardenia, is prized mainly for its ability to perfume the entire yard. Cape jasmine may be used as a groundcover, espalier, hedge, specimen, bonsai or container plant.

This South African native is an heirloom plant, botanically called Zaluzianskya capensis. If you’re thinking of starting an evening fragrance garden, night blooming phlox can have its own spot or pair it with other fragrant plants. Night phlox bloom in shades of white, purple, and even maroon.

The Casa Blanca Lily truly is the best white Oriental lily. With up to 8 flowers per stem, they bloom from mid-summer to early fall showering the garden in sweet perfume. Excellent cut flowers, each bulb will produce 10-15 flowers.

The ‘chocolate daisy’, ‘chocolate flower’ and ‘green eyes’ are all common names for the Berlandiera lyrata, a hardy North American species of flowering yellow plant that hails from the sunflower family and produces a sweet chocolate-like scent in the morning after blooming through the night. As the temperature rises during the day the petals close and the fragrance recedes.

8. Queen of the Night

While most plants flower for weeks, orchid cacti only blossom for a few short hours a year, and always at night. Botanists name it Epiphyllum oxypetalum, but the plant’s elaborate, nocturnal mating dance has earned it the nickname of “Queen of the Night” or “Lady of the Night.”

Four o’clock plants (Mirabilis jalapa) are bushy flowering perennials. These tuberous-rooted plants produce slightly pointed oval leaves on branching stems. They get their common name because of the way they bloom. The flowers open in the late afternoon, typically around 4 p.m. or so, and then remain open until the next morning. The approximately 2-inch-long blooms are trumpet-shaped with five petals, and they come in several colors, often shades of pink and red. Some four o’clock plants produce flowers in multiple colors, sometimes with marbling or other markings. This is a fast-growing plant that often sprawls in the garden. It’s best planted in the spring.

Flowering tobacco (Nicotiana alata) is a beautiful ornamental plant that can add color and fragrance to the garden. The plant features fuzzy, sticky foliage and flower stalks decorated with clusters of blooms. Appearing in the summer and fall, the flowers of most varieties open in the late afternoon to evening hours and fill the air with their potent sweet aroma. Flowering tobacco grows fairly quickly and should be planted in the spring after your area’s last frost.

The night-blooming jasmine (Cestrum nocturnum) is aptly named because its white-yellow, tubular flowers bloom at night; the flowers close during the day. It belongs to the Solanaceae family, also known as the nightshade or potato family of plants. It is known for its scent and is quite possibly the strongest scented plant in the world. When in bloom, the flowers release a scent of sweet perfume that pervades the area within 300-500 ft of the plant.

Night blooming waterlilies are a great addition to any medium to large pond. They first open at dusk and close about 9:00 am the next morning. They have a large leaf spread, with a very strong serration on the leaf outer edge. The water temperature should be at least 75 degrees F. before they are placed in the pond.

Fragrant, showy flowers in late summer lead many to plant tuberose bulbs. Polianthes tuberosa, which is also called the Polyanthus lily, has a strong and enticing fragrance that furthers its popularity. Clusters of large white blooms form on stalks that can reach 4 feet (1 m.) in height and rise from grass-like clumps.

Mock orange (Philadelphus coronarius) is a deciduous shrub (it loses its leaves in the fall) that has a dense, rounded growth habit. It sports oval, serrated, dark green leaves. And it features showy, cup-shaped, four-petaled flowers in the late spring and early summer that stretch roughly 1 to 2 inches across. These flowers are very fragrant with a sweet scent, which is the primary reason many gardeners grow this shrub. The flowers are said to resemble orange blossoms, which is how the shrub got its common name of mock orange. They are rich with nectar that attracts butterflies and other pollinators. Mock orange shrubs have a fairly quick growth rate and can gain around 2 feet per year. They are best planted in the early fall but also can be planted in the spring. The plant’s historic nostalgia has been forever written into the lore of the American West by the famous Lewis and Clark Expedition. The explorer Meriwether Lewis gathered samples of the intoxicatingly fragrant bush during the return leg of his journey through Idaho and Montana in 1806. The plants he gathered were dubbed the Philadelphus lewissi in his honour.

Dragon fruit cactus is a night blooming plant and the flowers last only one evening. If you want to see the spectacular display, head out with a flashlight in the dark of night, or visit your garden very early in the morning. Most dragon fruit plants won’t bloom for at least a couple of years.

Gladiolus tristis, or the night gladiolus, is a pale yellow or striped dark yellow and green flower that opens in the evening, exuding a spicy scent. These beauties grow three to four feet tall, with blooms first appearing in the late spring or early summer months. Night gladiolus requires full sun and regular watering. And, as parts of these garden plants are poisonous, they may not be suitable for homes with pets or small children.

Silene nutans, commonly known as Nottingham Catchfly, is a diploid perennial found throughout Europe and in some parts of the northeastern United States. The common name comes from the fact that this flower used to cover the outer walls of Nottingham Castle in England (think Robin Hood!), despite the absence of the species on the castle today. S. nutans exhibits a very interesting blooming pattern:  its flowers open at night and different floral organs open on successive nights. The first night, it opens one whorl of stamens so pollen can be dispersed via nighttime pollinators such as moths. The second night, a second whorl of stamens open. And on the third night, when the stamens have mostly wilted, it exposes three styles to receive pollen. It is thought that this sequential blooming pattern emerged to ensure outcrossing within the species and reduce inbreeding.

The foamflower is a native wildflower that got its name from the masses of foamy white to pinkish flowers that emerge on long, thin stems from a dense mound of foliage in the springtime. The flowers are undoubtedly the most spectacular aspect of this trouble-free groundcover. But even after the long bloom of four to six weeks is over, foamflower is an attractive plant year-round. Its semi-glossy leaves often have reddish variegations along the veins or spots in the center. In areas with mild winters, the foliage is semi-evergreen and sometimes turns reddish-bronze in the fall.

Brimming with clusters of fragrant flowers in spring, the showstopping wisteria vine is loved by many gardeners despite its assertive reputation. An extremely vigorous grower, this perennial can get out of hand easily unless carefully restrained.