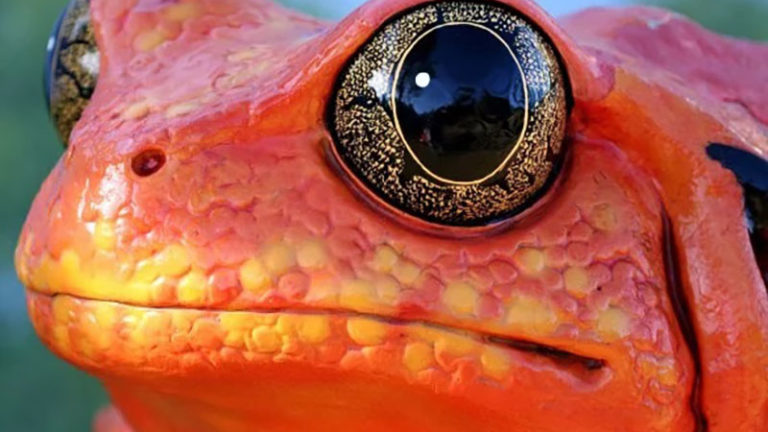 Always loved frogs and toads, but some people find them scary or ugly. We have so many stories and legends surround them. I tend to find then very unique, almost like a creature from another planet. Here are 15 of the most unique and intriguing frogs & toads.

The golden toad is an extinct species of true toad that was once abundant in a small, high-altitude region of about 4 square kilometres in an area north of the city of Monteverde, Costa Rica. It was endemic to elfin cloud forest.

Vietnamese mossy frogs greatly resemble a clump of moss thanks to their green color, black spots, and visible tubercles and spines. They hide in basins of water found in crevices with only their eyes protruding to keep a watchful eye on their surroundings. As a result, they’re almost impossible to spot when sitting still. These tree frogs have adhesive toe pads and can jump. Males have a pronounced breeding callus on the base of their inside finger. It is found in northern Vietnam and China, and possibly in adjacent Laos.

The Indus Valley bullfrog or Indian bullfrog, popular name Asian bullfrog, Asean bullfrog or Asia bullfrog, is a large species of frog found in mainland Myanmar, Bangladesh, India, Pakistan, Afghanistan, and Nepal. It has been introduced in Madagascar and India’s Andaman Islands, where it is now a widespread invasive species. They prefer freshwater wetlands and aquatic habitats. Generally they avoid coastal and forest areas. They feed on various type of insects, invertebrates, mice, shrews, young frogs, earthworms, roundworms, juvenile snakes, and small birds.

These beautiful and charismatic toads come in orange, green, yellow, brown, black and sometimes even purple, earning them the nickname “clown frogs.” Harlequin toads are committed breeders, often spending weeks in amplexus (the frog breeding hug), during which time the males forgo food and can lose up to 30 percent of their body weight on this “love diet.” During the breeding season, they come down to the riverbanks to woo potential mates, and some species even wave across the water to catch the attention of a female toad.

Poison dart frog is the common name of a group of frogs in the family Dendrobatidae which are native to tropical Central and South America. These species are diurnal and often have brightly colored bodies. This bright coloration is correlated with the toxicity of the species, making them aposematic. Some species display unusual parenting habits, including carrying both eggs and tadpoles on their backs. Although this “backpacking” is not unique among amphibians, male poison dart frogs are exceptional in their care, attending to the clutch, sometimes exclusively, and performing vital transportation duties.

The Mission golden-eyed tree frog or Amazon milk frog is a large species of arboreal frog native to the Amazon Rainforest in South America. It is sometimes referred to as the blue milk frog. It was first discovered along the Maracanã River in Brazil. These frogs are fairly large, reaching sizes of 2.5 to 4.0 in (6.4 to 10.2 cm) in length. Adult frogs are light grey in colour with brown or black banding, while juveniles will exhibit stronger contrasts. As they age, their skin develops a slightly bumpy texture. The “milk” in the common name comes from the milky fluid these frogs excrete when stressed.

The Argentine horned frog, also known as the Argentine wide-mouthed frog or the ornate pacman frog, is a species of frog in the family Ceratophryidae. The species is endemic to South America. It is the most common species of horned frog, in the grasslands of Argentina, Uruguay and Brazil. A voracious eater, it will attempt to swallow anything that moves close to its wide mouth, such as insects, rodents, lizards, and other frogs, even if this predator would suffocate in the process. The nickname “pacman frog” is a reference to the popular 1980’s arcade game Pac-Man, where Pac-Man himself eats quite a lot, and has a mouth that takes up most of its body, much like the Argentine horned frog

The Clown Tree Frogs are also known as Clown Frogs. These creatures are native to northern and central South America. They are found in Guyana, Suriname, French Guiana, Colombia, Ecuador, Brazil, Peru, Venezuela and Bolivia. Their natural habitat is subtropical or tropical moist lowland forest, freshwater marshes, and other stagnant or slow-moving freshwater water bodies. They are very common around human settlements. Clown Tree Frogs have a wide variety of color combinations and mixtures. Most of the time, they have a brown base color, with yellow, tan or cream patterns. Other mixtures that exist, include red and yellow or black. These frogs do have a very delicate skin and do not tolerate being handled. Their skin is also susceptible to poisons, oils and toxins. These creatures are tiny compared to the average frog. They rarely grow much more than 3 to 5 cm.

Hyalinobatrachium fleischmanni, the Fleischmann’s glass frog or northern glass frog, is a species of frog in the family Centrolenidae. It is found in the tropical Americas from southern Mexico to Ecuador. Specifically, these frogs occur in Mexico, Belize, Costa Rica, El Salvador, Guatemala, Honduras, Nicaragua, and Panama, Colombia, and Ecuador. Notice that this and related species have often been confused with each other, and the exact distribution depends on the source. Glass frogs have similarities to tree frogs. They look very close to the naked eye except glass frog’s eyes point forward and are golden. During the day, these frogs camouflage themselves under leaves but above water. Male glass frogs are 19–28 mm long while females measure from 23–32 mm long. They have a green semi-translucent color with yellow translucent hands. Their skin has dots which matches that of the leaves in the area. When confronted or approached, they tend to freeze up and not move. It is not specifically known what the glass frog eats, but it is assumed that they feed on small insects.

The Surinam horned frog, also known as Amazonian horned frog, is a bulky frog measuring up to 20 centimetres found in the northern part of South America. It has an exceptionally wide mouth, and has horn-like projections above its eyes. Females lay up to 1,000 eggs at a time, and wrap them around aquatic plants. The frog eats other frogs, fish, lizards, and mice. Tadpoles of the Surinam horned frog attack each other (and tadpoles from other species) soon after being hatched. This species was once considered the same species as Ceratophrys ornata. This dispute was later settled because the Surinam Horned frog inhabits a different habitat than its smaller cousin and does not interbreed with it in the wild (but will do so in captivity). This species has been known to prey upon the other species of horned frog, especially the northern race of Ceratophrys ornata.

Wallace’s flying frog (Rhacophorus nigropalmatus), also known as the gliding frog or the Abah River flying frog, is a moss frog found at least from the Malay Peninsula into western Indonesia, and is present in Borneo and Sumatra. It is named for the biologist, Alfred R. Wallace, who collected the first known specimen. This frog is quite photogenic, due to its large size, brilliant colors, and interesting behavior. With a body length of about 80-100 mm (males are smaller than females), it is one of the largest species of Rhacophorus. Its eardrums are large, as well as its eyes, which feature horizontal pupils. Its limbs are very long, and its fingers and toes are webbed right to the tips. Together with a fringe of skin stretching between the limbs, this flying frog can parachute to the forest floor from high in the trees where it is normally found.

Phyllomedusa sauvagii, commonly known as the waxy monkey tree frog, is a species of frog in the family Phyllomedusidae. It is native to South America, where it occurs in Argentina, Bolivia, Paraguay and Brazil. This species is arboreal, living in the vegetation of the Gran Chaco. Phyllomedusa sauvagii breeds during the rainy season, which typically lasts from October until March. Mating does not occur continuously throughout the season, only during or shortly after periods of heavy rainfall. Males will find a shrub or tree near or in a body of water where they will begin to vocalize to attract females. They are amplectant maters and, as such, breeding pairs create their nest of eggs together. The pair will move towards their oviposition site, usually on a leaf overhanging a body of water, where the male will assist the female in laying her eggs while simultaneously fertilizing them.

Breviceps fuscus, also known as black rain frog, plain rain frog, brown short-headed frog, and Tsitsikama rainfrog, and is a species of frogs in the family Brevicipitidae. It is endemic to South Africa. The specific name fuscus refers to the dark coloration of this species. The species is only found on the southern slopes of the Cape Fold Belt from Swellendam to the Outeniqua Mountains, at elevations of up to over 1,000 m (3,300 ft). It is a burrowing species inhabiting fynbos and forest fringes and does not require the presence of open water. Breviceps fuscus have a round body with short limbs and toes. They grow to about 40–51 mm (1.6–2.0 in) in snout–vent length. Skin has no warts, but pronounced widely spaced granules or small tubercles and pitting are present. Colouration is typically dark brown or nearly black, with a slightly lighter ventrum and no pigmented patterns.

Rhaebo haematiticus (formerly Bufo haematiticus) is a species of toad in the family Bufonidae. It is found in eastern Honduras, Nicaragua, Costa Rica, Panama, Colombia, northwestern Venezuela (Serranía del Perijá), and northwestern Ecuador. Its altitudinal range is from sea level to 1,300 m (4,300 ft) asl. Its natural habitats are primary tropical moist forest and submontane humid forest. It is a nocturnal, leaf-litter species that during the breeding seasons is found along small streams and large rivers. It tolerates some habitat degradation but only occurs close to forest. Threats to it are habitat loss caused by agriculture, wood extraction, and cattle ranching, and locally oil pollution and dams.